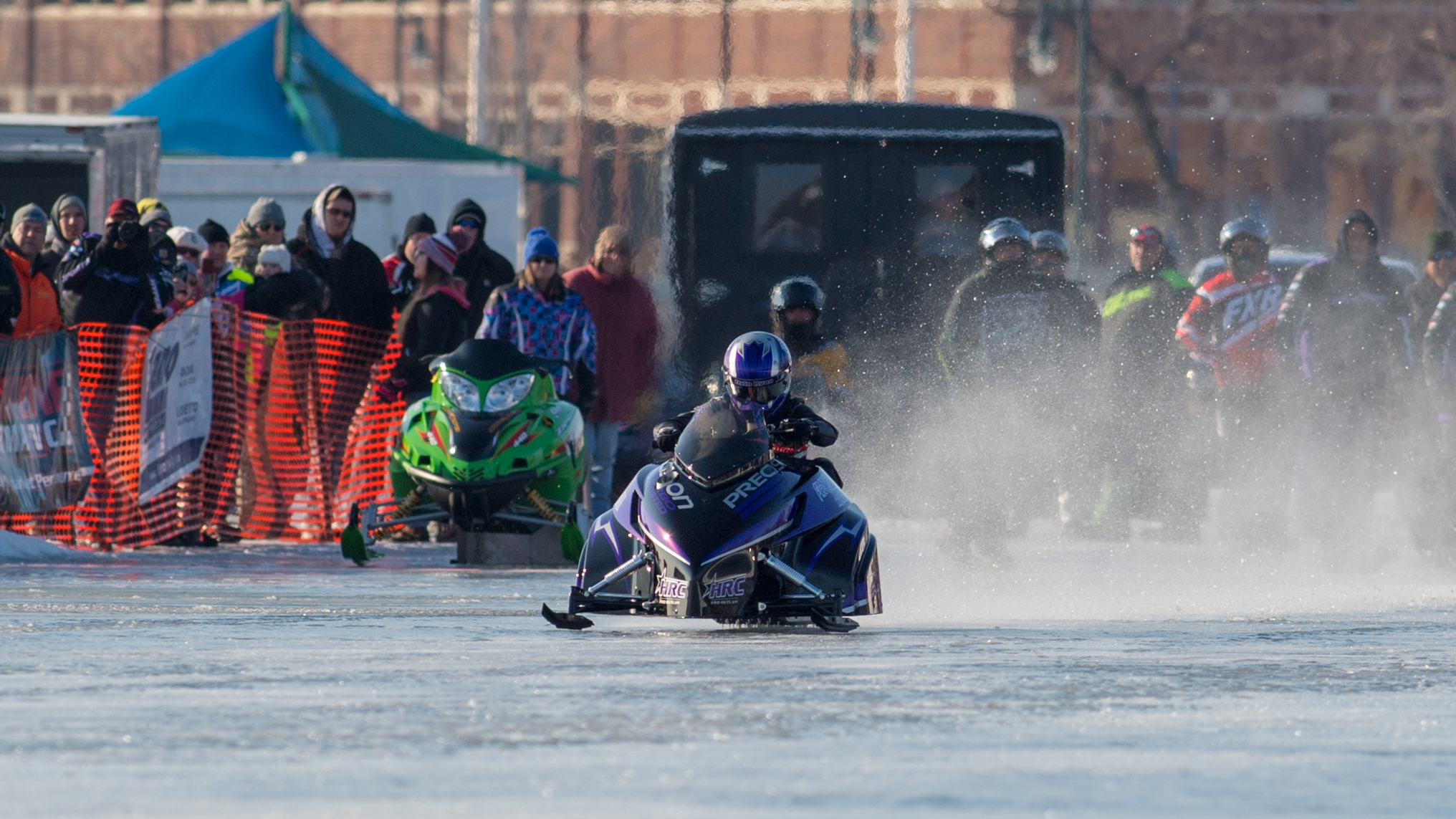 Temperatures ranged from a 25 degrees F in the early morning to 34 degrees F in the afternoon with only a slight breeze from the Southwest during the day. The 1000 foot shaved ice track, 4000 feet shaved with shutdown, was aimed to the Northeast. Temperatures were good to freeze up the melt down from Friday. With mostly Sunny skies holding for most of the day and some clouds during the early afternoon to save the ice. It was great that Ole Man Winter showed up this year to make some great ice!

Racer entries included nearly 90 entries on the Pro track and 90 on the Radar Run track making a great number of entries at 180 hot rods and close to 800 safe passes between the two shaved ice tracks. These snowmobile race enthusiasts are having a blast running their sleds, vintage rides, kid’s minis, and ATV’s on the Radar Run Track at NSSR they bring to the race track. There are nearly 40 classes on the Radar Run track that have trophies presented for first, second, and third places.  This race included the first of three races for the TopGun Challenge.

It was great weather to get the spectators out to watch some fast passes on the ice and the track held up well for racing action all day.  The Radar Run track had some great hot rods including vintage sleds, many running near or above the 100 mph mark.

Thirty five of the Pro Entries ran at speeds of 120 mph or better in this competition. Our competitors continue to come from throughout the Midwest and included racers for North Dakota, Iowa, Minnesota, Wisconsin, Illinois, and Michigan.

NSSR is the only ISR Affiliated Speed Run Organization where you can set World Records on the 1000 foot shaved ice competition and all require a backup speed within 2%. NSSR Racers posted sixteen World Records at this race due to the great weather and a very smooth track on good black ice.

Larry Norberg of the Slingshot Racing team took his Ski Doo to a new record in the Pro Stock 600 class up to 126.131 mph. Scott Kostman had just set a new record in the Improved Stock – Stock Turbo Four Stroke with his Artic Cat XF9000 in Fairmont and came back to Forest Lake to raise the bar to 142.339 mph. Corey Sullivan came out of Wisconsin to set a new Pro Max Record at 175.967 mph in the 1000 foot mark on his Turbo Charged Artic Cat. In the Vintage Sled Classes Boyd Burke bumped up the Mod Stock 340 class up to 89.626 mph, Doug Parent ran an amazing 85.544 on his Mercury Trail Twister in Vintage Stock D class, and Brice Konsela ran an amazing 67.924 mph on his Vintage Stock F class Polaris 250.

Vintage sleds continue to bring excitement  in the Pro Classes and in the Radar Run. Even better, they are all having a blast!  NSSR is seeing more and more Vintage Sleds coming out of the garage to race and spend a day with the family on the ice. What is neat is you can race all day and you run when you are ready to make a pass. Even better, the racing on the Radar Run track has unlimited runs if you buy the all day race pass!

Top Speed of the day honor and a new World Record in the TopGun Class was captured by none other than Flyin Ryan Ensor out of Sheridan, Illinois on the new Warning Family/Hypersports Artic Cat running in the TopGun Challenge, setting a new record pass in the 1000 foot mark at 188.646 mph and then backing it up with a 188.235 mph pass! Mr. Kyle Shilts  of the Bikeman Performance sled took a close second setting his top speed at 185.407 mph in the 1000 foot mark. The Shilts Bikeman team was excited, as to bump the standing top speed record from 2010 by nearly 2 mph and then getting put back into second in the same day, amazing! Keep an on this sled as they will tune to bump this number up in our upcoming events with a new power plant for Green Bay.

The excitement was just huge and had everyone holding their breath as Kyle Shilts came out and bumped the Fast Eddie Ensor Record of 183.439 mph set in 2010 in Chetek, Wisconsin to an amazing 185.407 mph. Then Flyin Ryan came out to follow with the exact same pass of 185.407 mph. Now we are tied and it is time to bump up the game. Flyin Ryan didn’t waste any time in turning up the boost and going back to back 188 mph passes! This was unbelievable and just an historical event for Snowmobile Speed Run History. Keep in mind, the official record for NSSR set in 1989 in the quarter mile by Marv Jorgenson in International Falls is 190.308 mph! Stay tuned as this is the goal to beat now in the 1000 foot mark. Will we see this in 2018 and do you want to be there to witness this? Be in Green Bay, WI on February 10th and in Chetek, WI on February 24th!

All records require a run within 2% to back up their World Record run and nearly 600 fans and race supporters were on hand to witness the racing throughout the day!

This NSSR Super Series event in Forest Lake, MN was hosted by Vannellis by the Lake, Waldoch Sports, Straightline Performance, PowerMadd, Castle Clothing, ProLine Performance, Wahl Bros Racing, McDonalds’s Liquors, B&L Trailers of Princeton, and Bellman Oil of Bremen, Indiana. A special thanks to John Waldoch of Waldoch Sports for the use of the new power broom to keep the track clean and Rob of Lano Equipment out of Anoka for the bobcat with snow blower and power broom. Also, a big thanks to the City of Forest Lake, the Washington County Sheriff’s Office, and the Minnesota DNR for their support and cooperation to make this event happen.

Ron and Stacy Bray of NSSR welcome you to our next event on Saturday, February 10, 2018 in Green Bay, Wisconsin as part of their Battle on the Bay. We would like to thank all our sponsors who make these races possible!  See www.racenssr.com and facebook under National Straightline Snowmobile Racing for more information on results and upcoming events.

Fertile, Minnesota – On the cusp of the 2012 -2013 race season Christian Brothers Racing was set to hit the

There’s nothing but treats with this month’s issue of Wisconsin Snowmobile News. As you gear up for riding season, sit back