Eagle River, WI (December 21, 2017) – Just in time for the holiday season, trails in the Snowmobile Capital of the World® are accessible to riders. The Vilas County Parks and Recreation Department recently announced that its state-funded snowmobile trail system, including the Eagle River 500, is officially open for the season.

Offering more than 600 miles of inter-connected trails, including many running alongside or across the world’s largest chain of freshwater lakes, the Eagle River 500 is one of the world’s most famous snowmobile trail networks. At its center is a 100-mile section maintained by the Sno-Eagles Snowmobile Club, who keep the riding surface in the best shape possible.

“We are proud to officially open the doors to the Snowmobile Capital of the World®,” said Kim Emerson, executive director of the Eagle River Area Chamber of Commerce. “The trails are groomed and ready, and we can’t wait to welcome visitors to Eagle River.”

Due to the early season conditions, riders are advised to check the weekly report for both trail and lake ice conditions before heading out. Information about snowmobiling in Eagle River – including regulations, trail passes and trail condition updates – can be found at www.eagleriver.org/play/snowmobile. 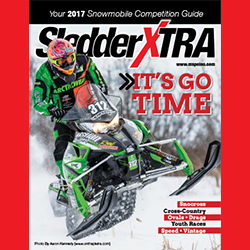 Sledder Xtra – Get it Now

The annual Sledder Xtra Race Guide is now online for your free viewing pleasure. Click it open to get inside details on hundreds events right here in the Midwest this winter. Download your copy, grab your pals and head out to the races!