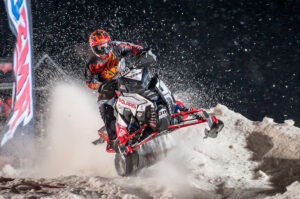 After making progress at the previous stop in New York, Todd and the team were anxious to carry momentum into the weekend and turn improved qualifying results into success in a main event. The heat race results were there again, with a win and a second place finish but it was not to be on Friday night as Todd raced into the first turn with a chance to take the lead but was turned over by contact from a sled behind him and had to watch as the pack raced away.
On Saturday, Todd was running in the fifth spot well into the main event when contact from another rider took him out of contention again. “We finally got things moving forward and had good speed in the heat races,” said Todd. We had a couple good starts in the finals both days but got bottled up and ended up on my heat the first night. Then somewhere in first half of the race on Saturday I got taken out in what I thought was a goofy spot to try and make a pass. But I’m determined to get back up and find my pace again in the finals. I’m really looking forward to Iowa and another weekend of racing.”
Last week, Trevor Leighton announced his retirement from professional snocross racing as a result of the multiple injuries he has sustained over the past two seasons. You can read Trevor’s letter to his fans HERE.

This month’s issue of Minnesota Offroad is now online and ready for download.