(December 19, 2016) Zimmerman, MN – Corin Todd continued to set a torrid pace in Pro Open qualifying, as the AMSOIL Championship Snocross series made its first-ever stop in Colorado, just outside of Winter Park in the Fraser river valley. 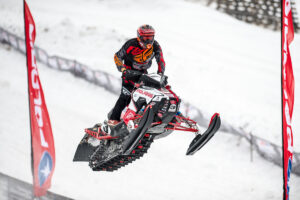 Todd won three of his four heat races during the weekend, this time demonstrating the full horsepower capabilities of the team’s Polaris 600R race machine and pulling the field up the large hill, steep first straight. All week, competitors battled the weather and 8,500 elevation to find the proper mountain setup and our crew had our machines on-point from the first green flag.

Todd struggled both days with his starting position in the finals. On Friday he started the main in the seventh position and was maintaining that spot until just over half way through the final when he had a coolant line break causing the machine to slow before ultimately suffering engine failure. On Saturday, Todd started the final in sixth and battled poor visibility throughout the race. He finished in eighth but on the strength of his qualifying still sits fourth overall in the championship.

Trevor Leighton started the weekend with one of his best efforts since joining the Pro Open ranks last season. Leighton had two top three finishes in Friday qualifying, earning the fifth pick on the starting line for the final where he finished 10th.

Unfortunately, Trevor was on his way to another front row start in Saturday’s final when a crash coming down the hill to the checkers in his second heat, put him out for the day.

An initial exam by the Mobile Medical team indicated a strain of the ACL and MCL in his knee and he will be going in for an MRI and further evaluation early this week at home in Idaho.

The team will now have a short holiday break before getting into the heart of our schedule when racing resumes on January 6-8 at one of everyone’s favorite venues, Canterbury Park in Shakopee, Minnesota.

Just like Pine Lake, the Park Rapids event turned into a tightly contested race with all four manufacturers winning classes.