Lake Nebagamon, Wisc. –March 22, 2016 – It was one of the longest and most frustrating seasons of his storied career, but in the end Ross Martin showed the true heart of a champion winning the AMSOIL Championship Snocross Pro Open season finale in Lake Geneva, Wisconsin. 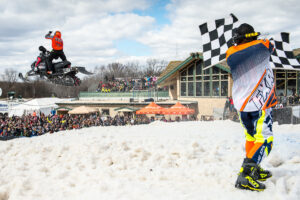 With the win, Martin became one of only two riders to compile more than a single victory during the season. His first coming just two weeks earlier at the previous round in Illinois. It was also the first time he has had multiple wins since 2013, despite missing nearly half the season with a nagging ankle injury.

Lake Geneva has always been good to Martin, who lives just 12 miles away in Burlington, Wisconsin, but this win did not come easy. Throughout the three-day event, the team struggled to find a comfortable setup and even though he posted very respectable fifth and sixth place finishes on Friday and Saturday, it was a last minute suspension change on Sunday that made all the difference.

“I missed so much of the season and this is such a different track it’s almost like we are still testing,” said Martin. “We just kept trying things all weekend and we went out for practice Sunday morning and we didn’t hit it. We made more changes and in the heat it was good and when I got that holeshot in the final and had a clear track I just pinned it. I came over the finish line on the first lap I could hear the crowd and didn’t know what was going on behind me and I thought I need to win this thing or not even go back to the trailer.”

Not to be overshadowed by Martin’s win was remarkable season turned in by Pro Lite racer Jake Angove. Injuries had prevented Angove from even competing past the midway point of the previous two seasons, but his arrival at Judnick Motorsports last summer brought a rewarding change for both parties.

Angove never qualified worse than second place throughout the weekend and finished with an important third place podium on Sunday to secure second overall in the championship. Angove was among the front-runners at the start of Saturday’s final but was turned over by his closest rival at the top of the uphill start, threatening his season standing. As he has done on multiple occasions this year, Angove put his head down and raced back to a top 10 finish which was equally important in holding on to his year-end ranking.

It has been one of the most challenging season’s in our recent history but wrapping up the way we did as a team was also one of the most rewarding finishes we have ever had. This will be an off-season unlike any other in which we continue to work and grow into 2016-17 and we want to express a sincere thank you to all of our fans and sponsors who also endured the challenges and helped see us through to the celebrations.

Make A Wish WI Grants Wish of a Snowmobile

This month’s issue of Wisconsin Snowmobile News is online now, available for free download. Check it out for features including: