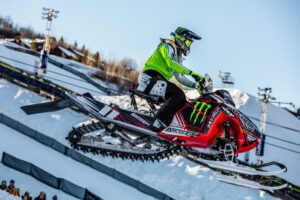 The Adaptive Snocross event has been at X since 2010, taking a break in 2012. All of the racers have some sort of disability and employ special sleds and equipment to allow them to hit the track. This year’s Snocross course featured six turns and was full of tricky banks, a step-on step-off feature, and a huge 80-foot jump right before the finish line as an option for the racers. With perfect light and a freshly groomed track, the stage was set for a great battle.

In the final, Thacker avoided a big three-snowmobile pileup right out of the gates to lock into a comfortable third position. He then went to work, eventually slipping into second place where he stayed thanks to smart racing and clearly fast riding. He crossed the finish to take the silver.

Hailing from Anchorage, AK, Thacker is known as a hard charging rider with a great attitude and big sense of humor. In 2009, he became the first rider to jump a snowmobile the length of a football field, clearing 301 feet at 87 mph. An injury in 2010 didn’t slow Thacker down—he charged forward as hard as ever and continued training. Thacker now relies on a special custom seat with a shock absorber to hit the course.

After the silver, Thacker exclaimed, “What, I just medaled at X Games? This was my ninth X Games, which blows my mind. I can’t thank Monster Energy enough—I’ve been with Monster for ten years, and I’m super happy to make this happen because they’ve been behind me for a decade. That’s crazy.” 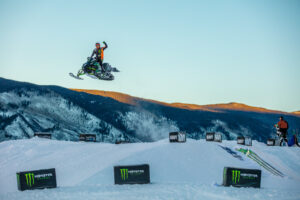 On top for a record nine years, dominance was once again the word to best describe Tucker Hibbert as he earned Gold in Monster Energy Snowmobile Snocross today at X Games Aspen 2016. It was all Hibbert all day as he easily won his semifinals race before owning the finals, bagging his record-setting ninth-straight Gold in the event, and tenth gold overall.

With today’s win, he’s now tied for the most consecutive golds in a single discipline, matching the record set by his Monster Energy teammate, Jamie Bestwick, who has nine golds in BMX Vert.

This year’s Snocross course was full of tricky banks, a step-on step-off feature, and a huge 80-foot jump right before the finish line, sending racers sailing about 100 feet as they cleared the jump. A slightly tracked-out course and a setting sun meant slightly more challenge for the racers today.

Dominant from the get-go, in the finals Hibbert controlled the first corner from the inside, taking the immediate lead. The #68 Monster Energy sled was running clean and fast, and true to form Hibbert took that early lead and ran with it. Where the rest of the field needed to check before jumps, slow down, and run cautiously in certain zones, Hibbert displayed his ability to keep the throttle pinned and maintained tons of momentum throughout every turn. The rest of the field needed Hibbert to make a mistake if they had a chance to ruin Hibbert’s nine-peat hopes, but that mistake never came. Hibbert stayed consistent and strong, constantly stretching his lead over 20 laps until the checkered flag flew. He was ahead by over 10 seconds by the end of it all.

Immediately after the race, Hibbert said, “It’s crazy to think about. We’ve been working so hard for it, and today everything went as good as it could and went as planned. It was super slippery out there, so I had to be safe and consistent in the turns. But I’m pumped, it’s awesome!”

More than just the man to beat, Hibbert is regarded as one of the best snowmobile racers in the world and has been nothing short of dominant for the last nine years. After taking gold as a young 15-year-old in 2000, he rebuilt over the next few years before beginning his unprecedented winning streak. A rider that’s simply used to winning, from his diet and his workout regimen to the perfect set up of his sled, the Minnesota-resident is a classic hard worker with the talent to match.

Snocross and Cross-Country Racers Storm Through Michigan, Minnesota and Alaska  Team Arctic terrain racers showed their mettle and strength during

The Association of Wisconsin Snowmobile Clubs invites the snowmobile world to Green Bay, Wisconsin, June 5-8 for the 45th annual