(January 6, 2016) – Under sunny skies at the Gogebic County Fairgrounds in Ironwood, Michigan this past Saturday, fans packed the grandstands eager to witness the official start of the TLR Cup Tour. Thanks to over 100 local volunteers, the historic half-mile track was race-ready despite warm weather leading up to the event. For many teams, the Ironwood Snowmobile Olympus was the first time their equipment hit the ice this season.

Pro Champ drivers ran for TLR points both Saturday and Sunday after the original December race for Round 1 was cancelled due to you guessed it, warm weather. After three rounds of qualifying, Ski-Doo’s Matt Schulz came out atop the qualifying ranks. Quickest off the line in the final, he would have no problem distancing himself from the field to claim the first win of the season. Jordan Wahl ran a solid race aboard his Polaris for the runner-up position and Ski-Doo newcomer Gunnar Sterne earned his first Pro Champ career podium finish.

Switching from Saturday’s winning Wahl Bros. chassis, Schulz drove his new Mike Houle Racing sled as he tried to continue his winning streak Sunday. Consistently fast off the line, Schulz was first into the corner and would maintain a comfortable lead until Cardell Potter, current TLR and World Champion, began closing the gap as the race went on. When the checkered flag waved, it would be Potter in second followed by Jordan Wahl.
“It’s days like today that make it all worth it,” said Schulz, who also had a career first taking two TLR wins in one weekend.

Mitchel Pankratz, driver of the #10 Polaris Starfire, took top honors in two of the TLR Cup vintage classes including Super Mod 340 FA/LQ and Super Mod 440. He and Tom Olson battled it out in both classes with Olson finishing second in each. Kyle Nouis took the win in Super Stock 340 FA/LQ, Sabrina Blanchet bested Russell Liba in Sno Pro 340 IFS and Trevor Spoakley dominated the Outlaw 600 field each time he hit the track.

Next up on the TLR Cup Tour is the AMSOIL World Championship Derby in Eagle River, where drivers will continue their quest for TLR points Friday night in the Sweet Sixteen feature. Until then, keep updated on social media! 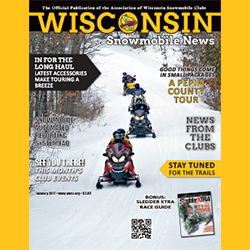 This month’s issue of Wisconsin Snowmobile News is now online. Download it now for loads of great features and the latest news.