(December 15, 2015) Valcourt, Québec– BRP announced today it is sponsoring the Warnert Racing snocross team and the United States Cross-Country (USXC) racing association with its XPS Lubricants brand. XPS Lubricants has had a storied history with both snocross and the Warnert Racing team including being a huge part of its five national snocross championships. In 2015-2016 the team will compete primarily on the ISOC National snocross series with Pro Open driver John Stenberg and Pro Lite driver Elias Ishoel. 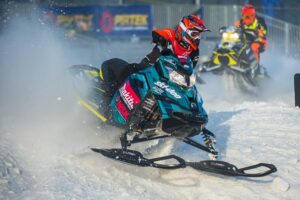 XPS Lubricants joins Makita Industrial Tools and GMC Trucks – both recently re-signed to multi-year partnerships – as major sponsors of the 2015-2016 Warnert Racing team. “XPS Lubricants is excited to be working with Warnert Racing again,” said Paul Prudhomme, XPS brand manager. “Elias Ishoel and John Stenberg continue the Warnert Racing tradition of putting the team and its sponsors on the podium. XPS is developed like a mechanical part during engine development, and we’ve proven no other oil protects Rotax engines as well as Page 2 XPS. We look forward to the brand energy, onsite and online activation Warnert Racing brings representing the XPS brand.”

“We have been working with BRP since the beginning of our team and XPS has been there nearly as long, it’s great to have XPS back again as a part of our program,” said Mark Warnert, co-owner of Warnert Racing. “One of our championships and many of our biggest victories were with XPS on the sleds and drivers. We know we can do fun things with them in our marketing program, too.”

XPS Lubricants is the presenting sponsor of the Sport 600 class for the USXC X-Country Snowmobile Racing 2015-2016 season. Cross-country rules dictate stock snowmobiles be used, so it is the perfect venue for XPS synthetic two-stroke oil, which is engineered precisely for Ski-Doo’s industry-leading 600 E-TEC engines. No other oil is designed as an actual mechanical part during engine development like XPS with its custom blend formulations and carefully engineered additives.

Star quarterback “retires” for a day in order to enjoy the open-air exhilaration, stability and control of the Can-Am Spyder

Mattracks, the original and #1 manufacturer of rubber track conversions, is no stranger to the Motion Picture industry. Since its “Inception” 25 years ago, Mattracks has been involved in many motion pictures, both behind the scenes and in front of the camera.