Elk River, Minnesota (November 24, 2015) – One of the most recognized names in snowmobile aftermarket performance products has joined forces with one of the premier ISOC National Snocross Teams, forming a partnership that will surely lead to snow-packed goggles for some unfortunate competitors. 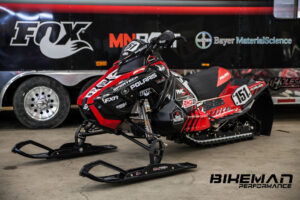 Bikeman Performance Plus, St. Croix Falls, WI, produces and distributes performance products for a variety of powersports applications including UTVs and ATVs, but they’re best known for their wickedly fast, high-reliability snowmobile performance products. Carlson Moto, Elk River, MN, is one of the top ISOC National Snocross Teams in the country with two of the top young riders in pro snocross, Ryan Springer and Andrew Carlson.  Last season Springer captured the ISOC Pro Lite National Championship, with Carlson finishing the season just behind him in the standings. This season, both Springer and Carlson will be making the leap to the elite Pro Open Class, where horsepower is king.

“The jump to Pro Open is not something we’re taking lightly here at CM,” said team owner Chris Carlson.  “We will be lining up against the best drivers and equipment in the world, so as we prepared for this big move we obviously needed to align ourselves with a development partner that we could trust, who had a proven track record of building reliable horsepower and who understood the grueling nature of snocross racing,” he added.  “We’ve been impressed with the talented team at Bikeman Performance Plus from day one and we’re excited to partner with them and showcase their products and services on the track this winter,” said Carlson.

The objective for Bikeman Performance was to partner with a premier snocross team that had both great riders and great mechanical support.

“Bikeman Performance Plus is very excited to team up with Carlson Motorsports for the 2015-16 snocross season, Said Bikeman’s GM Mike Hurd.  “We’re confident that our extensive experience in powersports performance, coupled with some of our proprietary performance technology, will provide the Carlson Moto racers that needed extra edge over their competition, he added.  “This organization has extremely talented riders and crew who will make the absolute most out of the performance we deliver; we look forward to a strong partnership and to making a powerful statement in Pro Open Snocross, said Hurd.

The Carlson Moto crew will put their Bikeman-tuned Polaris IQR 600s to the first test of the 2015-2016  season at the ISOC Amsoil Snocross National at Spirit Mountain Resort in Duluth, MN, November 27–29, 2015.

To learn more about Bikeman Performance, visit their website at www.bikemanperformance.com

Robbie Malinoski, one of the most popular pro snocross athletes of the past decade, has officially announced his retirement as