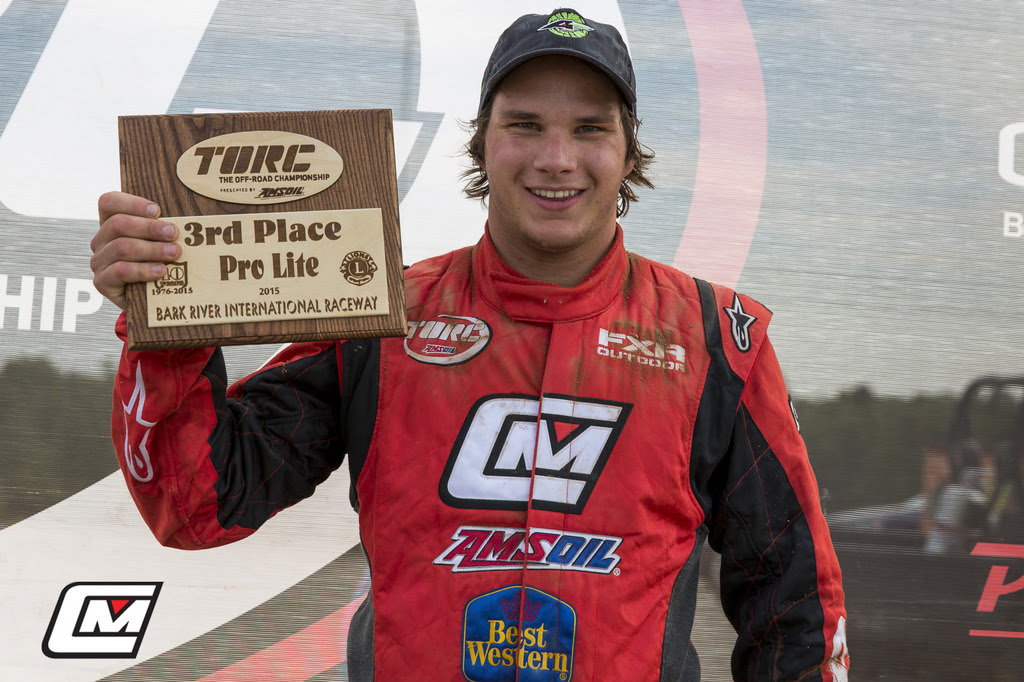 Elk River, Minnesota (August 20, 2015) – It was only fitting the very track to introduce the Carlson family to short-course off-road truck racing is also where Andrew Carlson would notch his first podium finish this past weekend. Faced with a steep learning curve at the start of the season, The Off-Road Championship (TORC) Pro-Light rookie driver showed unrelenting determination to learn the nuances of TORC racing – gaining insight, speed and confidence with every race. It all came together in Bark River, Michigan where Carlson qualified fast, raced even faster and finished third at the line. 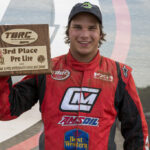 After a disappointing first day, the Carlson Motorsports crew regrouped and tweaked the Atturo Tire, Best Western, AMSOIL truck set-up in preparation for Sunday’s action. Carlson hit the track with a hint of controlled recklessness, laying down some incredibly fast laps on the well-prepped, 1.5-mile Bark River International Raceway. Andrew’s times were fast enough to garner him a favorable starting position and from there he put it all together in a charge towards the front.

“The crew had the truck dialed in perfectly,” Carlson said after enjoying his time on the podium at the close of Sunday’s action. “We’ve all been learning this season, and they (the crew) just nailed it on Sunday.”

By the competition caution, Andrew had worked his way up to 5th and when the green unfurled again, he set his sights on a podium finish. Quickly he moved up another spot in the pack and then disposed of Cam Reimer to move himself into third. With laps winding down in the 10-lap final, Andrew continued to push and crossed the line just 1.35 seconds behind the current point leader Doug Mittag.

“This is what we’ve been working so hard for all season,” said a clearly jubilant Carlson. “Everyone has been super supportive…the other drivers, TORC and of course our sponsors…I’m happy we could show them results this quickly.”

The podium finish gives Carlson his fifth top five finish on the season and moves him into 8th in the year-end standings. With just two races left on the season, Carlson is just 9-points out of 7th in the 19 driver field.

The final two races of the season will return to Crandon, Wisconsin, September 5-6, to what is widely regarded as the premiere track on the TORC series. The Bark River race will be broadcast on Fox Sports – Round 13: October 22nd at 9:00pm Central and Round 14: October 29nd at 9:00pm Central. Visit the TORC website for exact dates and times for broadcasts, past videos, point standings, and the latest team news. You can follow the Carlson Motorsports team throughout summer season on their website www.carlsonmoto.com or follow them on Facebook @CarlsonMoto or Twitter #CarlsonMoto. You can also follow TORC Pro-Light racer Andrew Carlson via Twitter @151Carlson. 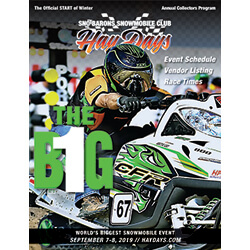