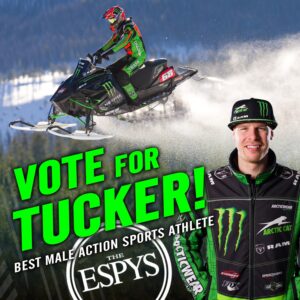 Alongside Hibbert, Supercross champion Ryan Dungey, skateboarder Nyjah Huston, snowboarder Mark McMorris and freestyle motocross athlete Josh Sheehan were selected by a panel of judges for their standout performances in action sports. Online voting will determine the winner. The 2015 ESPYS Awards show will be broadcast live on ABC Wednesday, July 15 at 8 p.m. ET.

One vote per web device allowed now through Wednesday, July 15.

“With all the talented action sports athletes around the world, it’s a huge honor to be nominated but I’d really like to take home the ESPY this year. A snowmobiler has never won this award so it’d be a big win for the sport. I know snowmobilers are a passionate group of people so hopefully they’ll all put in their vote!”

The 2015 ESPYS, hosted by Joel McHale, are LIVE on ABC Wednesday, July 15th in downtown Los Angeles. The flagship event is the one night where the sports world joins together to celebrate the best moments of the year.

Duluth, Minn (December 1, 2013) The much anticipated start to the 2013-14 AMSOIL Championship Snocross tour was a success for

Looking for something to do this weekend? Head over to the 25th Annual Waconia Ride-In in Waconia, Minnesota for three