Many people don’t know exactly what being an Iron Dog means. The Brigade was formed to be a “social and honorary type of organization that could make a solid contribution to furthering the sport and industry, and to be a speaker’s bureau that would be available to promote the sport.

Over the years the organization has grown to 125 members who are inducted at their annual meeting during the International Snowmobile Congress each June. Membership is by nomination with the main requirement being that the nominee having served at least 15 years in the sport of snowmobiling either in industry, journalism, pioneer, government or volunteer service. Many of their members are also members of the International Snowmobile Hall of Fame.

A formal banquet was held to celebrate the anniversary. Approximately 30 Iron Dogs met along with their guests to induct new members and honor some of their Brigade as well. This year’s inductees included Frank Roy, Kim Raap, and Dale Hickox.

At each Congress, you can clearly see the “Dogs” presence as they volunteer their service to help make the event run smoothly. They serve as greeters, ticket takers, auctioneers, and speakers among other things.

At the awards banquet, they announced the recipient of the George A Eisenhuth Distinguished Service award. This year’s recipient was Dennis Burns of Canada.

Minneapolis (August 15, 2012) – As part of its annual summer sales meeting and its presence at the Sturgis® Motorcycle 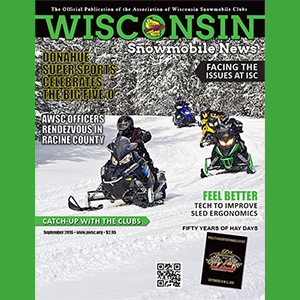 ERX Motor Park is now open for practice. A heavy band of snow, coupled with below freezing temperatures allowing our four