Fertile, Minn. (April 15, 2015) – With the ISOC National series already wrapped up, Christian Brothers Racing riders Dave Joanis and Logan Christian traveled north of the border to race the final events on the CSRA Canadian National schedule. These final two events took place March 28-29 in Kitchener, Ontario, and April 11-12 in Barrie, Ontario. Joanis competed at both events while Christian opted to compete only at the race in Kitchener. 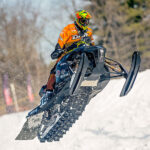 A native of Ontario, Joanis got his start racing the CSRA circuit and his return did not disappoint fans. He swept the race in Kitchener, taking wins in both Pro Open finals against the best the CSRA had to offer. Two weeks later Joanis came back and won at the National Snowcross Championship event in Barrie. He was looking forward to another sweep with a win on Day 2 but bad fuel forced him to drop out of the event before the final.

“The last two rounds of the CSRA season were really good for me,” said Joanis. “I won every race in Kitchener and things went great in Barrie until we cracked open a bad can of fuel. Three wins in two weekends is a great way to end the season!”
Christian, just off a career-best Top 5 points finish on the ISOC National circuit, was on hand for the race in Kitchener and scored podium finishes in both Pro Open finals. 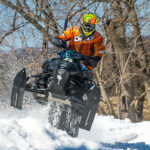 “It was fun to race in Kitchener,” said Christian. “The track was fun and really fast. I struggled a little on Saturday and finished third, but Sunday I had the track dialed and was giving Dave a run for his money. It was great to finish 1-2 and stand on the podium with my teammate!”

Fans can keep up with Christian Brothers Racing during the off-season by following the team on Facebook. We will be posting regular updates throughout the summer as we prepare for next season.

Exciting news as NSSR headed to a fantastic event in Chetek, Wisc. at the Chetek Winterfest which was held in conjunction with the Outlaw Snow Drag Racing! National Straightline Snowmobile Racing held its fourth race of the NSSR 2018 Super Series for the “Fastest Show on Ice.”

(January 5, 2016) – Troy, Michigan – To showcase its products in the powersports market and demonstrate its in-depth, on-site