MINNEAPOLIS (March 20, 2015) – If the entire extreme powersports industry took a vote on who had the best competition year on the race track, experts from snowmobiles to road and dirt bikes, UTVs and ATVs and personal watercraft would be hard pressed not to cast their vote for Tucker Hibbert (Monster Energy/Arctic Cat/Ram Trucks) and the year he and his team put together on the AMSOIL Championship Snocross, powered by Ram Trucks, tour. 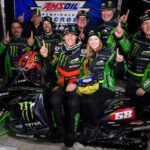 Hibbert’s 2014-’15 competition season was filled with highlights that only come along once in a great while not just with snocross racing, but with any form of motorsport. Still only 30 years old, Hibbert is that rare breed of crossover athlete that can compete at the national level in both the two uniquely different sports of snocross and motocross – better than anyone ever has.

ISOC caught up with Hibbert to get his take on the AMSOIL Championship Snocross season, his most memorable moments and the importance of the team that surrounds him.

ISOC: Start with the obvious here. Just a fantastic season of racing for you. You won 13 of the 17 Pro Open finals – en route to your ninth AMSOIL Championship Snocross title, scored your 100th career win and won a record-breaking eighth-straight X Games Snocross gold medal (13th X Games medal). Does this competition year rank right up there with some of your most memorable ones?

Tucker Hibbert: I would say so, yeah. It’s been pretty crazy. Seems each year we figure out a way to say that’s the ‘Best year ever,’ then the following year we seem to top it somehow. The last three seasons have been really, really great for us. Winning the championships and having a lot of success. I came into this year ready to go, like every year. But you just never know until you get going. It was awesome to have success right away in the first couple races of the year (Note: Tucker won the first four-straight Pro Open main events to start the season) and you hope to carry that momentum right through the end of the season.

ISOC: You turned 30 prior to the start of the 2014-’15 AMSOIL Championship Snocross season. Did your preseason training this year differ at all from past years?

Tucker Hibbert: This year was pretty much the same as year’s past as far as preparation and training. I’ve felt better than ever at the start of the last few seasons. As far as fitness goes it doesn’t seem like my age is effecting me any so far. I’m sure it will at some point, but I’ve been able to keep doing the same (fitness) program that I have the last several years and it seems to be working. I’m hoping I can keep doing that, but like always, the competition keeps getting better and they find a way to be stronger and faster. So can never just keep doing the same thing and hope for the same results. You have to continue to adapt and push yourself, always looking for ways to better. There’s room for improvement.

ISOC: Correct us if we’re wrong, but I think most would agree that if you had to put your finger on one event that really stood out amongst the rest on the AMSOIL Championship Snocross tour for you it’d have to be the come-from-behind win at Deadwood (S.D.) that gave you your 100th career Pro class win. 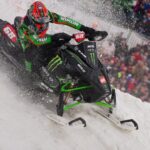 Tucker Hibbert: I was at 99 wins for a while, lost three races in a row. So it was getting a little bit frustrating trying to get to that No. 100. At that race in Deadwood where I actually got to 100 I got the holeshot then fell over in the second turn. Made a mistake and ended up in last place. Then I was able to charge all the way back for the lead with a couple laps to go. It was a pretty intense race for me, really small track. High intensity and pretty crazy track, and I have this love/hate relationship with Deadwood. But it was probably the best way I could have reached 100. So yeah, I would say it was the most memorable race of the season for me.

ISOC: Talk a bit about your 2015 Arctic Cat ZR6000R SX sled you rode this year and the amazing job your team did pulling everything together to where you didn’t have any major equipment failures the entire season.

Tucker Hibbert: Just like every year it’s super important to have a really solid performance from your team in order to win the championship. And this year was probably the best year we’ve ever had in terms of the snowmobiles and equipment being really solid, consistent and reliable. I didn’t have any mechanical issues all season, which is a testament to Arctic Cat and to my team of mechanics that work so hard to make sure I’ve got the best equipment on the track. Without them, obviously, I wouldn’t be able to win the championship and have so much success. It’s a huge team effort and everyone works very hard during the week to make it easy for ourselves on the weekend.

ISOC: To what extent do you, personally, work on your race sleds back at the shop?

Tucker Hibbert: We don’t really have any specific job titles, so everyone just steps in and works on what needs to be done. And that’s what’s really cool about it. Most of my work comes in the preseason in terms of building the new sleds. Then once the season begins I tend to focus as much as I can on riding and doing what I need to do to be fast on the sled.

ISOC: The Monster/Arctic Cat/Ram team is very close. And this year, just prior to Lake Geneva, you lost one of your team members Joel Dahlen, father of your best friend and team manager Rob Dahlen. Talk a bit about Joel, what he meant to your team and how you so graciously honored him on top of Friday’s podium at Lake Geneva.

Tucker Hibbert: Joel did a little bit of everything for our team. He was a construction man – a builder – his entire life. Super busy, but he always took any time off that we asked of him to help the team. He’d be here on weekends and at night helping us with a pretty wide variety of things, including remodeling and building much of my dad’s race shop, remodeled a couple houses for me – as well as doing a lot of the body work on our race sleds, too. So whenever I’d crash a snowmobile Joel was there to fix it. He also did a lot of the work on our race trailers, with the cabinets and stuff. (Hibbert pauses and his voice cracks a bit.) But probably more than anything he was our No. 1 fan. Always supportive of me and Rob. So on Friday, when we won the championship, I dedicated that to Joel. It was for him for sure.

ISOC: Does taking a break from the AMSOIL Championship Snocross series to race X Games help in terms of resetting your focus on the Pro Open title?

Tucker Hibbert: X Games is a lot of fun for us and we look forward to it every year. It’s kind of halfway through our season with ISOC, so it gives us a little bit of a break from that and mixes things up partway through the season – which is a good thing. It’s a different experience than what are regular weekends are, but it’s good for the team, good for me and I think good for the sport of snocross in general. And winning like we have (eight-straight golds) give us a lot of momentum for the second half of the ISOC season.

ISOC: Wrapping things up, do you have any plans in place to race motocross on the Outdoor National series this summer?

Tucker Hibbert: I don’t have any solid plans yet. Hope to race some Outdoor Nationals. Last year we raced RedBud, Millville and Washougal. I really love racing motocross and it’s a huge part of my life – a huge part of my success overall as an athlete. We’ve still got to get everything wrapped up with snocross here, but in a couple weeks we’ll switch gears and get back on the bike. It’s a fun time of the year for me to get on two wheels and do some racing.

ISOC: That sounds like a plan. You’ll no doubt have a crew of snocross fans at your hauler in Michigan (RedBud) and Minnesota (Millville). Good luck on your dirt bike and we’ll look forward to seeing you at Hay Days.

Tucker Hibbert: Thanks. Look forward to seeing everyone at the motocross nationals this summer. We’ll always have posters to sign, so make sure you stop by and say ‘Hey!’

ISOC would like to thank its series sponsors, as without them the “Greatest Show on Snow” would not be possible. A hearty “Thanks” to: AMSOIL, Ram Trucks, the United States Air Force, Arctic Cat, Polaris, Ski-Doo, FXR, Dayco, Hayes Brakes, Stud Boy, Pirtek, Prinoth, Jimmy John’s, Nielsen Enterprises, Fox Shocks an Michelob Golden Light.

DEADWOOD, S.D. (Feb. 2, 2013) – The little historic town of Deadwood, South Dakota was the snowmobile capital of the

February 22, 2013 – This winter season (November to April) is on track to be the deadliest on the ice 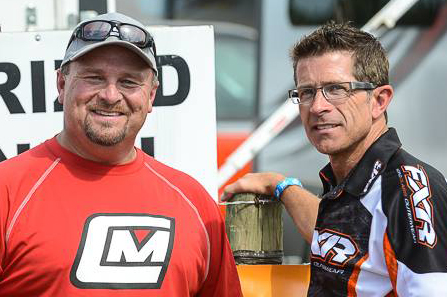