Valcourt, QC, March 3, 2015 – It was another standout weekend for Ski-Doo X-Team racers. In Mt. Pleasant, Michigan Tim Tremblay raced to his first victory of the season in the ISOC Pro Open class, while Maxime Taillefer and Elias Isohel collected Pro Lite trophies of their own. In Alaska, Ski-Doo riders captured second place in the 2,000+ mile Iron Dog cross-country race and four of the top eight spots – one of the most grueling Iron Dogs in recent memory, because of low snow levels. And in the far north of Quebec Dave Allard captured the Chibougamau Rallye win.

The win was a sweet one for US Air Force/Ford/Milwaukee Tool racer Tremblay. It was his first time on top of the box in the premier division in over two years; he missed the second half of last season with a serious leg injury.

“The last two years it has been really tough to win a race,” said Tremblay. “I won both of my qualifiers on Friday and just came up a little short in the final. Tonight there was a little mistake by the leader and I was there to take the spot and I couldn’t be happier. I couldn’t have done this without everyone’s help, the whole team, Ski-Doo and the guys from KYB have worked so hard this year. It’s just really nice to get one out of the way.”

In Pro Lite, Tremblay’s Scheuring Speedsports teammate Taillefer had his best outing ever, finishing 1-2 in his Friday qualifiers before racing to a second place in the main event. Taillefer was picked up in January to fill in for the injured Lincoln Lemieux and has been delivering great results on the ISOC tour.

It is no surprise when Elias Isohel finishes on the podium and although he had an off night on Friday, Isohel came back strong on Saturday for a second place aboard his NSK/GMC/Makita Tools MXZ.

Leo Patenaude made a return to the podium on Saturday in the national Sport class. Patenaude swept his heat races aboard his Ingles Performance Ski-Doo and finished third in the final. This was his third trip to the podium this year and he maintains a solid grip on sixth in the championship with one weekend remaining.

Kurt Bauerly and Marica Renheim continued their domination of their respective Pro-Am +30 and Pro-Am Women’s classes and have all but locked up season championships with only one round remaining on the calendar for those divisions.

Congratulations also goes out to Colby Crapo of the BOSS Racing/Jimmy John’s team for a season-best fourth place finish in Saturday’s Pro Open final. Crapo and teammate Darrin Mees have had their share of struggles this winter, but both finished in the top 10 and are looking forward to carrying the momentum in the ISOC Grand Finale on March 13-15 in Lake Geneva, Wisconsin.

Alaska has been hurting for snow, but that has never stopped the 2,000+ mile Iron Dog race from commencing. This year, there were warm, wet conditions, even stretches where racers rode on just dirt for more than 30 miles. In the end, only 20 of 37 two-man teams who started the race finished.

The top finishing Ski-Doo team was Team 7 of Scott Davis and Aaron Bartel in second, riding the new Ski-Doo MXZ Iron Dog sled. The 55-year old Davis had a rough corkscrew at one point in the race, but he and his sled recovered beautifully. Other Ski-Doo finishers:

It was an especially impressive run by the Sindorfs, who finished the race as a fully independent effort on stock sleds loaded with stock BRP accessories – everything from the LED Auxiliary Light to the Montana GPS Kit to the LinQ tunnel bags. And in a testament to BRP durability, the only work they did on their snowmobile was changing carbides and tightening the track; they did not even have to change a stock belt.

Dave Allard also used one of the new Iron Dog models to win the Chibougamau Rallye cross country race with Maxime Duffour finishing third. The Rallye is a 200 mile/322 km race that takes place in the harsh conditions of northern of Quebec.

For more information on Ski-Doo snowmobiles visit www.ski-doo.com, or the On Track blog site for racing specific information 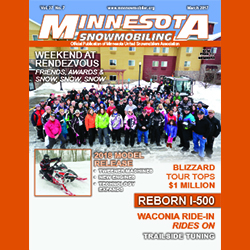 The March issue of Minnesota Snowmobiling is online now; be sure to check it out for great features and the latest news.

Eagle River area trails are in VERY GOOD condition, are groomed, and we’ve got three inches plus of new fresh 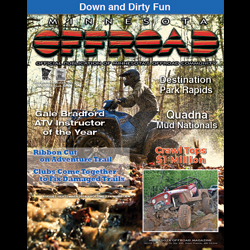 The latest edition of Minnesota Offroad is now online, for free digital download. Get it now for features including:  -Quadna