MT. PLEASANT, Michigan (Feb. 27-28, 2015) – With mountains of snow and Michigan’s No. 1 resort and casino – Soaring Eagle – in the background, a perfect stage was set for the stars of AMSOIL Championship Snocross, powered by Ram, to show off their talents to the core motorsports fans in and around the Winter Wonderland state.

Qualifying in the No. 1 position, Tucker Hibbert (Monster/Ram/Arctic Cat) took the inside gate pick and ran elbow-to-elbow down the start straight with Kyle Pallin (Mystic/Loctite/Polaris) in the Pro Open main event – with Pallin taking the holeshot by the thickness of the Polaris decal on the front of his sled. But Hibbert would grab the lead on the ensuing turn and never looked back, winning again by double digits and increasing his Pro Open point lead to 100 points over the second place overall racer.

“I’m feeling really good right now,” said Hibbert from atop the Soaring Eagle podium, a slew of Ram Truck VIPs up from Auburn Hills, Michigan cheering him on. “Everything’s clicking for us as a team, the sled’s running excellent and this was an awesome track tonight. Long, technical straights – I had a lot of fun out there.”

Ripping through the downhill section and into 3rd place through the 180-degree bowl turn at the base of the back hill on lap one was Ross Martin (Judnick Motorsports/Polaris), which moved Tim Tremblay (AMSOIL/Scheuring/Ski-Doo) to 4th. But the former Pro Open champ Tremblay was having nothing of Martin’s pass and got him back on the ensuing U.S. Air Force Flyaway section.

Martin would stay all over Tremblay, even tapping Tremblay’s track with his front ski midway through lap three. But a couple laps later in the 14-lap contest a mental error would cost Martin as he was black-flagged for jumping on a yellow flag. So with Martin out of the way, Tremblay set his site on 2nd place Pallin.

As Hibbert ran up front comfortably, Tremblay began to methodically stalk 2nd place Pallin, passing him midway through lap eight. Pallin would answer once, gaining the lead back briefly, but Tremblay would put the hammer down and take control of 2nd.

Battling for 4th and 5th at this point in the contest were Arctic Cat-mounted Cody Thomsen and Adam Renheim (Boss Racing/Ski-Doo), with Logan Christian (Christian Brothers/Arctic Cat) moving on rapidly after a poor start, as was David Joanis (Royal Distributing/Arctic Cat).

As the laps clicked off Hibbert put more and more distance between himself and Tremblay and Pallin, despite the fast-paced battle for the 2nd and 3rd positions. Tremblay would take charge of 2nd place with a couple laps remaining, with Pallin holding off a furious charge from Renheim for 3rd and Joanis out-running Christian late in the contest to round out the top five.

While a massive pile up at the start of Friday’s Pro Lite main event at Soaring Eagle disrupted nearly half of the entire field, Pro Lite point leader rookie Ryan Springer got out of the gate fast and in front of the carnage, through No. 2 point sitter Trevor Leighton (Leighton Motorsports/Polaris) wasn’t as fortunate.

Springer’s wire-to-wire win, coupled with Leighton’s 12th place finish, opened up a sizable gap up top in the Pro Lite points with just one race remaining (Lake Geneva, Wisconsin) after this weekend in Michigan.

Overcoming a mechanical issue in his second heat race, Springer sang the praises of his Polaris sled – especially its rocket ship starts on the Soaring Eagle course.

“Got the holeshot and rode away,” said Springer of his win. “These points were really important, so I tried to ride smart when I got out front.”

Making a rush at the lead was another Pro Lite class rookie, Elias Ishoel (Warnert Racing/Ski-Doo), who actually had his sled up front momentarily on the opening lap – only to crash in the 180-degree bowl turn at the base of the hill. Springer would hold the lead, with Canada’s Maxime Taillefer (Ski-Doo) in 2nd and Friday’s Pro Lite No. 1 qualifier Andrew Carlson (Carlson Motorsports/Polaris) in 3rd.

Running in 4th and 5th were Arctic Cat-mounted Corey Watkinson and Tyler Adams, who would challenge for the podium midway through the race, but weren’t able to close the deal when it counted late in the contest.

Springer continued to run fast through the lapped traffic – including past Leighton (12th) – to score the win. Taillefer and Carlson would hold their position, rounding out the podium in 2nd and 3rd, respectively, with Watkinson (4th) and Adams (5th) rounding out the top five.

Saturday’s Stud Boy Holeshot at Soaring Eagle would go to Tucker Hibbert as the No. 1 qualifier won the battle to the first turn ahead of Corin Todd (Leighton Motorsports/Polaris) and Kyle Pallin.

Pallin would then make quick work of Pro Open rookie Todd, moving up to 2nd place midway through the opening lap. But, as it would on numerous occasions in Saturday’s Pro Open main, disaster would strike as Pallin shot off the track on the start straight – collecting a massive Soaring Eagle feather banner in the process.

Pallin’s mistake would be Ross Martin’s and Tremblay’s gain as they immediately moved up into 2nd and 3rd behind Hibbert. Treating fans at Soaring Eagle to another bar-to-bar battle – as they had on Friday night – Martin and Tremblay diced back and forth before the former Pro Open champ, Tremblay, shot out past Martin and into 2nd place at the end of lap three.

With Hibbert up four seconds after four laps, all signs pointed to a sweep of the Michigan round, much like Hibbert swept the previous weekend’s AMSOIL Championship Snocross Pro Open races in Chicago. Hibbert was running two seconds faster, per lap, than the rest of the competition – Tremblay and Martin included.

On lap five Adam Renheim, who placed a solid 4th  on Friday, fired up from mid pack to catch and pass Martin on the opening corner to the massive uphill section – giving the Swedish racer 3rd place. But Martin was still in it, as less than four seconds separated the No. 2 through No. 5 positions behind Hibbert, including Pallin (in 5th) who had charged back from his early race departure from the track.

Lap nine would prove pivotal in Saturday’s contest as seemingly out of nowhere Hibbert went down in a corner, his sled getting caught up in a myriad of sponsor signage and Tuff Block lane markers. Unable to free himself, Hibbert stood there helplessly at trackside – still tethered to his running sled. Tremblay would go by to take first, then Martin (who got back past Renheim), Renheim and Pallin. In fact, Tremblay would come past the stranded Hibbert AGAIN, putting the defending champ down two laps.

With four laps remaining in the contest Tremblay clicked off strong and consistent laps, earning himself the victory – his first of the season. “Tucker crashed and I passed him and was so happy,” said Tremblay. “I didn’t want to make any mistakes, so I took it easy and the win came to me. This feels awesome. I haven’t been winning the last two years, so it feels great to get back up here.”

Down 3.7 seconds to Tremblay to start lap 12, Martin pulled out all the stops to catch his Canadian rival – only to unload himself when he cross-rutted a landing in the trick downhill section. Pallin would move up into 2nd at this point, followed by a hard-charging Logan Christian (Christian Brothers Racing/Arctic Cat) into 3rd.

Tremblay would walk away with the win, Pallin and Christian holding onto their 2nd and 3rd place positions, respectively. Boss Racing/Ski-Doo’s Colby Crapo would score his first top five finish of the year, coming in with an excellent 4th place run, followed by Cody Thomsen (Arctic Cat) in 5th. Noteworthy: Hibbert would eventually remount and place 9th and still holds a commanding 89-point lead over Tremblay in the Pro Open overall points, 593-504.

Ryan Springer blew the previously tight Pro Lite point chase out of the water this weekend at Soaring Eagle, winning again on Saturday to complete the class sweep and take a commanding 34-point lead into the final round of the season in two weeks at Wisconsin’s Grand Geneva Resort.

Springer, who qualified No. 1 for tonight’s Pro Lite main, got a solid start and quickly moved up to 2nd place behind Corey Watkinson (Arctic Cat) early in the contest. Springer would bide his time, checking out some line options, before passing Watkinson for the race lead on lap four.

“I got off to a good start, but not the best,” said Springer on his win and seventh podium finish of the year. “I was out in like 4th, the raced Watkinson there for a couple laps before I was able to get by him for the lead. Overall it was a great day, going 1-1 in my heats as well. And to sweep Michigan makes it so much better.”

Lining up on the start with Springer was the No. 2 qualifier Trevor Leighton. The Pro Lite point leader earlier in the season, Leighton struggled on Friday (12th) at Soaring Eagle and was looking for redemption in the form of returning to the podium on Saturday. Leighton started strong and was in 3rd place early after the Stud Boy holeshot from #179 Arctic Cat pilot Korbyn Anderson and Watkinson.

The pace quickly heated up once Springer shot up to 2nd place, with Watkinson up front in the lead. Then following Springer’s pass for the lead on lap four, Watkinson dismounted from his sled on the following lap, handing over 2nd place to Leighton and 3rd to Elias Ishoel.

Springer had the Soaring Eagle track wired at this point and began putting seconds between himself and the 2nd and 3rdplace sleds, up five seconds midway through the contest. And moving up from the back row and his 11th place qualifying position was Andrew Carlson (Carlson Motorsports/Polaris). Carlson, who was on Friday’s Pro Lite podium (3rd), rocketed all the way up to the 4th position, one click ahead of Travis Muller (Cottew Motorsports/Polaris) in 5th.

On lap seven Ishoel would run up inside on Leighton, bumping plastic and foreshadowing a pass that would happen soon thereafter in the opening moments of the white flag lap.

From there Ishoel distanced himself from Leighton, with Carlson and Muller in quick pursuit. And when Springer cross the finish line in 1st place to set off the fire pots, the positions back of him remained the same; 2nd – Ishoel, 3rd – Leighton, 4th– Carlson and 5th – Muller. And in the overall points Leighton fired back up to 2nd place (after being bounced down to 4thafter Friday), with Carlson, Muller and Ishoel rounding out the top five in that order.

Beginning with AMSOIL Championship Snocross’ season-opening round in Duluth, Minn. and running through the season finale in Lake Geneva, Wisconsin, CBS Sports Network will air 17 one-hour programs of the ACS races. 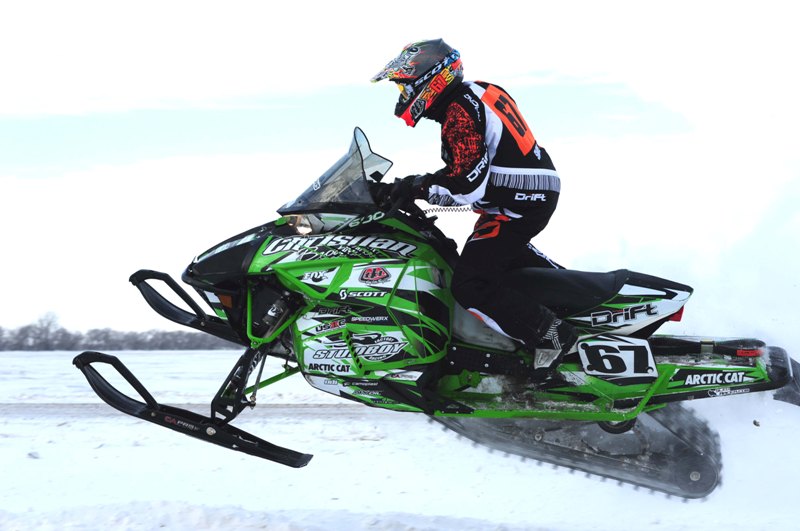 GOLD MEDAL WINS FOR TEAM ARCTIC IN SNOCROSS AND CROSS-COUNTRY