Elk River, Minnesota (February 25, 2015) – Ryan Springer picked up the chase for the year-end AMSOIL Championship Snocross crown right where he left off…atop the box with his fourth win in a row. However it was not without a fight at the famed Route 66 Raceway near Chicago, as his teammate Andrew Carlson found new speed and tenacity, challenging Springer at every turn and pushing him to the very end of the 10-lap final. At the checkered Springer had won again and Carlson gained valuable points with a second, but perhaps more importantly Carlson found “another gear” as he posted the fastest lap of the night.

“Springer has been nearly untouchable,” said team owner Chris Carlson. “When was the last time a Pro-Lite rider has won four in a row…ever? Now Andrew is riding with the same speed and confidence…no question this thing (points race) is going down to the final race in Lake Geneva.”

Testament to the speed and abilities of both riders came Friday night when they battled side-by-side for several laps before Springer narrowly edged Carlson for the win. The rest of the Pro-Lite field offered little to challenge the teammates as they pulled away during the 10-lap final.

Day two at Route 66 saw Carlson rip-it-up in qualifying as his confidence continued to swell, and that speed carried over into the main event where Andrew nailed the holeshot with teammate Springer close in tow. Unfortunately both riders came out on the wrong end of traffic tangles and had to battle back. Springer narrowly missed the podium as a lap rider blocked his progress; and Carlson finished 6th, earning valuable points in the championship chase.

Springer still has a firm grasp on the number one red plate, and teammate Carlson is just 15 points behind. “It’s gonna go down to the wire,” said a pumped up Carlson after the Chicago event. Geneva is my favorite track and it feels like the team just keeps getting stronger with each race.” 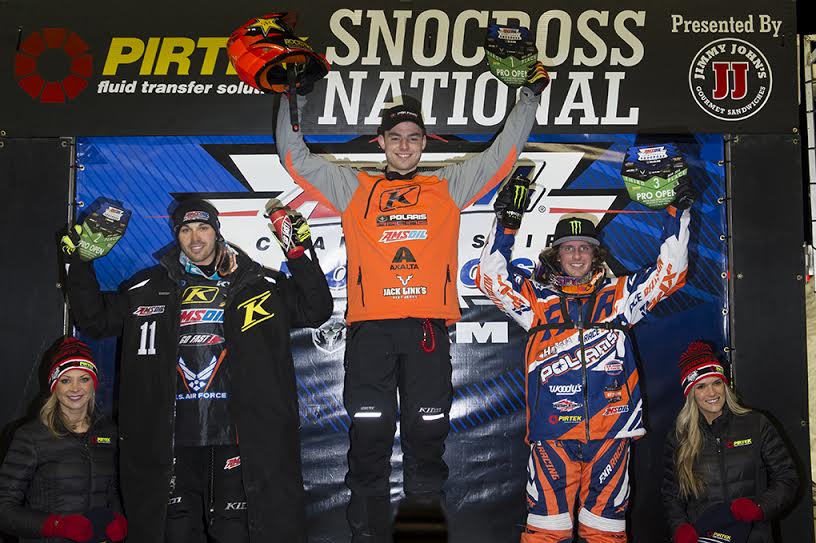 MINNEAPOLIS (Jan. 9, 2015) – The extreme cold temps did nothing to freeze the confidence of Ross Martin (Judnick/DuPont/Jack Links/Polaris),