(Weyauwega, Wisconsin – February 17, 2015) – Looking back, it’s hard to believe that all nine rounds of TLR Cup Pro Championship racing have been completed and new class champions named. It has been an amazing season, from the addition of five vintage classes to the TLR line-up, the introduction of a new venue, and the most professional racing on ice. The final two rounds, taking place last weekend at the Waupaca Fair Grounds in Weyauwega, Wisconsin, were no exception to the phenomenal race action that’s occurred all season.

In the closest TLR Cup Pro Champ year-end points battle in series history, Saturday started off with Malcolm Chartier, 2013 and 2014 series champ, just 16 points ahead of Cardell Potter. Both drivers saw ups in downs in qualifying rounds, each winning and each not finishing a round; Chartier as the result of a burnt-down engine, and Potter pulling off the track with a broken heim joint. In what has been a Ski-Doo dominated field all season, the Polaris’ had their time to shine as Jordan Wahl was the number one qualifier for the 15-lap final, followed by Joey Fjerstad and Dustin Wahl.

As the wind whipped on an extremely cold day, even for Midwestern standards, flagman Aaron Korinek pulled the green flag and the field was off. Not surprisingly, it was Chartier leading the pack out of corner two. He enjoyed a lead for the first two laps, until he once again suffered motor failure and an early retirement from the race. With that, he also lost out on series points needed to secure his position in the points race. From there, Potter took off, lengthening the distance between him and his competitors with each lap. He would go on to lap several drivers in the back of the field before taking the checkered.

Jordan Wahl had a hold on the second position for over half of the race but after eight laps, also suffered a mechanical failure. Schulz then inherited the runner up spot, as Fjerstad and Blaine Stephenson battled for the final podium position behind him. Getting around Fjerstad with one lap to go, it looked as if Stephenson would earn his first podium finish until he too suffered a stroke of bad luck and blew a belt. Rounding out the top five behind Fjerstad were Dusting Wahl and Nick Van Strydonk.

With better luck and a super-fast sled, Chartier qualified in the number one spot for Sunday’s feature. He led the first four laps of the race, until Potter made a pass for position through corners three and four. Not unlike the prior day’s feature, Potter was able to create a comfortable gap between him and anyone else hoping to get the win. Schulz maintained third but was challenged by a hard charging Stephenson, once again vying for his first podium finish. Running out of laps, Stephenson finished fourth and Gunnar Sterne fifth.

With his back to back wins, Potter captured the title of TLR Cup Points Champion, with Schulz moving into second, just one point ahead of Chartier, in third. Potter’s team, Miracle Racing 58, was awarded another honor at Sunday night’s banquet, as Robby Carlson was named Mechanic of the Year. Stephenson, who had an extremely impressive season, was named Rookie of the Year.

Saturday’s TLR Cup #2 Super Mod 444 FA/LQ’s feature winner was Ken Beckford, and Tom Olson, newly named class points champ, took the checkered in TLR Cup #4 Super Mod 340, with Justin Ernst and Jim Zierden finishing behind him. Steve Smith, who travelled from Alaska to race most of the series, was the high points finisher in TLR Cup #2, despite missing the final round this weekend.

In the TLR Cup #1 Sno Pro 340 IFS/X feature, Justin Ernst made an early pass around Scott Henrichs and stretched his lead with every lap. Henrichs would finish second, with Jeff Brown in third. Russell Liba, who was unable to compete in the final TLR Cup rounds, was named points champ for the class.

Matt Bennett, who has been fast all season in TLR Cup #3 Super Stock Fan 440, put on a dominating performance in the feature, beating out Brian Magee and Justin Ernst. Bennett was also awarded the class points champ title at Sunday night’s banquet, although upon further review, it was Ernst who came out slightly ahead in year-end points. Congratulations to both drivers on their excellent year.

Clinton Gumieny and Jay Nieuwenhuis put on a show in the TLR Cup #5 Super Stock 340 FA/LQ feature. After a restart with six laps to go, Nieuwenhuis continued to try and pass for the lead and finally did so on the last lap. Gumieny would finish second and Tom Olson third. With similar performances all season, Nieuwenhuis also claimed the class points champ title.

In addition to the Mechanic and Rookie of the Year awards, a Race of the Year award was also given. This year’s winner is the Ironwood Snowmobile Olympus. The race, taking place in Ironwood, Michigan, was the first race on the TLR Cup schedule this year, and the event organizers overcame all the challenges that Mother Nature threw at them and built an excellent track. 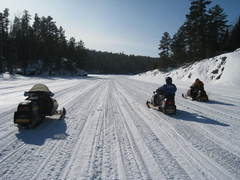 Anyone interested in trail use and motorized recreation in Kabetogama State Forest in St. Louis County is encouraged to attend