Taking his 99th victory in December, Hibbert fell short of number 100 three straight rounds. He finished 4-2 at Canterbury Park in Shakopee, Minn. and came within a sled length of winning Friday night at Deadwood after an aggressive ride. 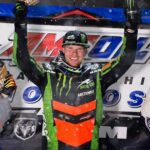 Hibbert entered Saturday with a fresh focus and drive. He turned the fastest lap in practice, won both qualifying rounds and grabbed the Stud Boy holeshot in the 15-rider, 22-lap main event. Out front early, it momentarily looked as though Hibbert could run away with his 100th win. In turn two, he hit a wall of snow left by a groomer and was rolled on his side – collecting Tim Tremblay in the process. After struggling to get his sled unlocked from Tremblay’s sled, Hibbert reentered the race nearly a lap down and 20 seconds behind the leader.

What happened next, was a downright impressive display of determination and talent. Hibbert charged forward as if no one else was on the short, bullring-style track with him. Lap after lap, he made clean passes – crushing the gap between him and the race leader. Without a clear idea where he was in the running order, he kept pushing and didn’t give-up until he saw the checkers and flames go off on the finish-line jump.

“I didn’t have a game plan after I crashed (in the opening lap Saturday night) and once I got up, I didn’t consciously think ‘I’m going to win this race.’ I just put my head down and charged as hard as I could until I got the checkers. I didn’t even take time to look at the pit board so I didn’t know where I was the entire race,” said Hibbert.

Hibbert now holds a 64-point lead in the ISOC Pro Open Championship. Next up is the Eastern National in Salamanca, NY Feb. 6-7. Visit tucker-hibbert.com to follow him as he continues to chase his ninth national championship.

In recognition of public lands as a resource belonging to all Minnesotans, Gov. Mark Dayton has proclaimed Friday, Aug. 31,