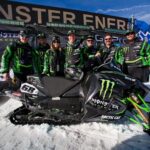 Tucker Hibbert kept his incredible win-streak alive, taking his eighth-consecutive gold medal after a dominant performance in snocross. Hibbert now has 13 overall medals in X Games competition dating back to his first appearance in 2000, at which he won his first of nine career gold medals. Joining Hibbert in snocross competition were Team Arctic racers David Joanis, Logan Christian, Cody Thomsen and Mike Bauer.

Cory Davis captured the most medals of any snowmobile athlete at this year’s X Games, with a Silver in Long Jump and a Bronze in Speed & Style. Willie Elam and Brett Turcotte were the other Team Arctic competitors in Speed & Style.

Jeff Tweet was a whisker from collecting a medal in Snocross Adaptive. He finished fourth overall, with teammate Chris Heppding taking sixth.

“Everyone at Arctic Cat is proud of the 17 athletes and crew members who made this the most successful X Games in recent memory,” said Mike Kloety, Team Arctic Race Manager. “It takes a huge effort to just make it to X Games. With millions of viewers watching from all over the world, Team Green gave an outstanding performance that brought medals and great competition.”