Fertile, Minnesota (January19, 2015) – The little eastern North Dakota town of Grafton becomes an important place in the world of cross-country snowmobile racing every January. Grafton is typically the best place for riders to “tune up” before hitting the three-day I-500 race that takes place a few weeks later. Despite thin snow, race organizers were able to string together a 24-mile course that consisted of a challenging mix of river, woods, tree line and windswept ditches, the perfect mix of terrain for a cross-country event. Christian Brothers Racing riders Zach Herfindahl and Ryan Trout were on hand Saturday, January 17, to compete in the Pro and Semi-Pro classes. 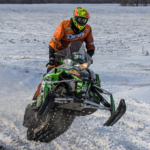 DRIFT Racing/Arctic Cat rider Herfindahl lined up for the 5-lap, 120-mile Pro 600 race and set the pace for the class right from the start. After over two hours of riding Herfindahl held a 46-second margin over second place, despite running into trouble at one point.

“On the last lap coming off the river I ran out of gas on a hill and had to pull my sled back down to the bottom to get it running again,” said Herfindahl. “I made it to the finish line for the win though.”

Herfindahl also finished second in the 2-lap, 50-mile Pro Open race, roughly 14-seconds behind the winner. Without much snow cover, the mild day meant for a sloppy race.

“The sun came out during the day and things got really dirty out there,” said Herfindahl.

After three events, Herfindahl has the points lead in both Pro classes on the USXC circuit. 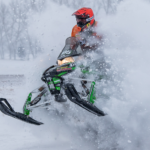 “I was finding good lines in the Semi-Pro 600 race and then I hit something on the river that flipped me over and I couldn’t get the sled started,” said Trout. “I came back for the Semi-Pro Improved race and was on a mission. I had a great race and ended up second, just a few seconds behind the winner.”

Sportech, Inc. is partnering with Feed My Starving Children (FMSC) to put on a MobilePack event Thursday, May 5 in