In Friday night’s Pro Open final at Shakopee, Ross Martin battled for the holeshot, came out of the first turn in second, then flew into the lead by the end of the first lap and never looked back. He built up a lead of around eight seconds at one point as he claimed his first victory of the season.

“Unbelievable. This is where I belong,” Martin said from atop the podium at Canterbury Park after the race. “My confidence is back and I’m going for it… Canterbury’s always been good to me. The team worked so hard over the break getting my sled set up to where I want it and it all came together tonight. We just had to get this done.”

On Saturday night, Pallin won a Pro Open final for the first time in his career, and he was joined on the podium by third-place finisher Martin. Kamm finished fifth, Todd was seventh, and Justin Broberg (Hentges Racing) took eighth.

“It took four years for this moment to happen, but I finally did it!” Pallin said via Twitter afterward. “I got my first Pro Open win at Canterbury.”

The win kept Pallin in second in the tight Pro Open points race. Kamm is fourth in points, while Martin moved up to sixth, Scott is ninth, Broberg is 10th, and Todd is 12th.

An eventful weekend for Leighton Motorsports included good and bad news, and a positive final result as Trevor Leighton finished second on Saturday night to become the class points leader.

In Friday night’s Pro Lite final, teammates Leighton and Zak Mason crashed together in the first turn, ending their hopes of winning. Leighton remounted and finished ninth while Mason was injured. Leighton Motorsports reported on its Facebook page that Mason fractured his scapula (shoulder blade) in Friday’s crash, and could miss at least a month of racing.

Trevor Leighton finished second in Saturday night’s final and was joined in the top 10 by: Andrew Carlson (Carlson Motorsports) in fourth, Springer in sixth, Muller in eighth, and Johnstad in 10th.

After six founds of ISOC National racing, Polaris racers dominate the Pro Lite points standings, led by Leighton, who moved from third to first in points with his strong Saturday finish. The other five Polaris racers in the top 10 are: Carlson in third, Johnstad in fourth, Springer in fifth, Muller in sixth, and Mason in seventh.

The next stop on the ISOC National tour will be Jan. 30-31 in Deadwood, South Dakota 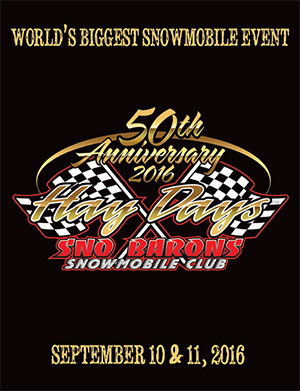 2 Days and Counting til’ Hay Days

The “official start of winter” gets underway this weekend, with hoards of swappers sweeping the gates and setting up shop

Twelve conservation officer candidates, selected from 800 applicants, are spending the next 12 weeks at the Minnesota Department of Natural