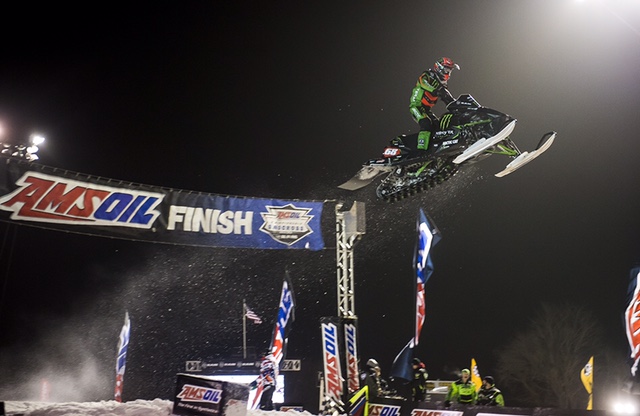 GLYNDON, Minn. (Dec. 12-13, 2014) – With balmy temperatures (by northern Minnesota/North Dakota standards) and a serious lack of snow, the usual one minute-plus AMSOIL Championship Snocross, powered by Ram, lap times at the massive Buffalo River Race Park track were whittled down to a bull ring oval and sub-30 second lap times with plenty of bar banging action for the packed house on Friday.

Qualifying in the number one position, Hibbert was pretty much unstoppable on Friday at BRRP. After dominating and winning both of his heat races, Hibbert improved upon a fourth place start position off the  holeshot, grabbing the main event’s race lead on lap eight and winning by 11-plus seconds over former Pro Open class champ (’12) Tim Tremblay (AMSOIL/Scheuring/Ski-Doo).

“Tonight’s race track was really short, and it was tough,” said Hibbert. “So you just had to hammer it all the way around. There was so much roost it was like going through a car wash the whole way around the track.”

Doing his best to hold off Hibbert, the Pro Open class rookie (Todd) held the lead through lap eight of the 23-lap main before Hibbert would finally catch and pass him. It made for five solid laps for Todd out front.

Down the front straight fans were treated to Pro Open racers clearing three separate landing areas off the AMSOIL finish line jump (“Quadding” as its referred to by racers) in a 130-plus foot leap of faith pretty much on each and every lap. During the mid-portion of the contest Tremblay would charge through the pack, getting past Joanis and Todd and into second place behind Hibbert. But Hibbert’s lead would be too much for the former champ to overcome, settling on a well-deserved second place on the night.

“I’m happy with second,” said Tremblay. “It was a great night for me, from my qualifiers to the main.”

Hibbert would win by 11-plus seconds, with Tremblay in second and Joanis rounding out the Pro Open podium in third. The rest of the top five included Lincoln Lemieux (AMSOIL/Scheuring/Ski-Doo) in fifth and Todd holding on to a hard-fought fourth.

Three races in the books for the AMSOIL Championship Snocross Pro Lite class and there have been three different winners. Friday it was James Johnstad that was able to utilize some creative line selection to pass Trevor Leighton (Leighton Motorsports/Polaris) late in the contest and hold on for his first win of the season.

“I was behind Trevor and Travis (Muller) for quite a bit of the race, but kept seeing lines and kept pushing until I finally broke through,” said Johnstad. “Snow packed into my goggles so many times I couldn’t see. Just glad I was able to stay on my sled and win here in front of the hometown fans.”

Pulling the holeshot in the big rush off the start for the lead was Muller (Cottew Motorsports/Polaris), followed by Leighton in second and Johnstad in third. The three would separate from the rest of the pack, with Leighton moving up onto Muller quickly (by lap three). On the same lap Duluth Saturday winner, 16-year-old Elias Ishoel (Warnert Racing/Ski-Doo), would get bucked off his sled while rushing to catch the leaders and was not a factor in the remainder of the contest.

Using the entire track, Leighton dove to the inside of turn one to open lap five – with Muller running outside – and claimed the lead. Leighton held the lead for through the halfway point of the 15-lap Pro Lite main when Johnstad fired around the outside line in turn one to pass Muller, then set his site on Leighton – eventually passing him with three laps remaining.

Johnstad would quickly open up a 1.5 second lead and run it through – unchallenged at that point – the checkers for the win. Leighton would hold on for second and Muller took third. Rounding out the Pro Lite top five were Corey Watkinson (Watkinson Racing/Arctic Cat) in fourth and Zak Mason (Leighton Motorsports/Polaris) in fifth.

Heading into Saturday’s U.S. Air Force Snocross National main in Fargo, Hibbert had qualified in an auspicious seventh position. His opening heat race featured a frightening wreck where Hibbert landed on the back of Corin Todd’s (Leighton Motorsports/Polaris) sled, his momentum carrying his sled up onto Todd’s body. Hibbert would remount and rally back to fourth, while Todd left the track under his own power (but was unable to answer the bell for the Pro Open main).

“It was a struggle for us in the heat races for sure, pretty scary,” said Hibbert. “But I’ve been racing a long time and fall back on my experience. Found some lines in the final and we got a couple more wins.”

Pulling the main event Stud Boy Holeshot was Kody Kamm (Hentges Racing/Polaris), the Pro Open’s number one qualifier. Earlier in the day Kamm had clocked a 25.3-second lap in the opening heat, the weekend’s fastest lap time. And while the stage looked to be set for an epic Kamm vs. Hibbert bull ring-style oval track battle, Hibbert would make short work of Kamm, passing him briefly for the lead on lap two, then for good on lap three.

Running up front uncontested, Hibbert quickly opened up a five second lead. Kamm would then be challenged by a charging Ross Martin (Judnick/DuPont/Jack Links/Polaris), who would catch and pass Kamm on lap 11. Kamm came railing back, but Martin had the better line selection and rode his most consistent and fast race of the season for second place.

“We had some tough luck the first weekend and yesterday we just weren’t doing it,” said Martin on his first podium finish of the season. “Got things figured out and hopefully we can keep things rolling and get back up here.”

Hibbert, Martin and Kamm (third) would run unchallenged through the entire 23-lap Pro Open main at BRRP. Battling for the fourth and fifth spots were AMSOIL/Scheuring/Ski-Doo teammates Lincoln Lemieux (fourth) and Tim Tremblay. unfortunately for Tremblay, who finished second on Friday, a late-race get off would end his night and Boss Racing/Ski-Doo’s Adam Renheim would round out the top five.

Saturday’s Pro Lite final was a three-racer duel from the start and highlighted by the most spectacular pass of the season thus far.

On lap ten and running in second place, 16-year-old Norwegian sensation Elias Ishoel (Warnert Racing/Ski-Doo) cracked the throttle and literally berzerked his Ski-Doo over the AMSOIL finish line jump, 130-feet through the air and passing Zak Mason (Leighton Motorsports/Polaris) for the lead and eventual win. With the memorable move, Ishoel also bumped Mason out of the overall number one spot in the Pro Lite division (Ishoel 144, Mason 143 through four of 16 rounds).

“On the finish line I jump … and yeah, I pass him,” said Ishoel with a smile.

Off the start Ryan Springer (Carlson Motorsports/Polaris) yanked the holeshot, but was passed by Mason before the end of the opening lap. Mason and Ishoel then broke away from the rest of the field, but on two occasions each racer nearly threw away his position with near-crash bobbles through the tricky rhythm section on the BRRP back straight.

By lap five Johnstad had made his way up to third place, looking to challenge Ishoel and Mason. The three separated from the rest of the field and put on a great show for the fans, dicing in the corners and drawing close down the straights before, on lap ten, Ishoel pulled the Pass of the Year thus far in both Pro classes on the AMSOIL Championship Snocross circuit.

Off the aerial pass and into turn one, Ishoel rocketed out to the lead and opened up a gap on Mason. Johnstad would challenge Mason for second, but Mason was able to hold off Johnstad’s furious run to the checkers. Rounding out the top five in Saturday’s Pro Lite main at Fargo were Jake Angove (Fort Fremont Racing/Polaris) in fourth and Travis Muller (Cottew Motorsports/Polaris) in fifth. 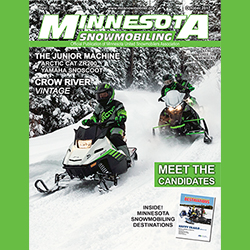 This month’s issue of Minnesota Snowmobiling is now online, available for free download. Get it now for features including:  -The

Minneapolis, Minnesota (November 26, 2012) – The season opened with the slamming of fist atop the International Series of Champions’