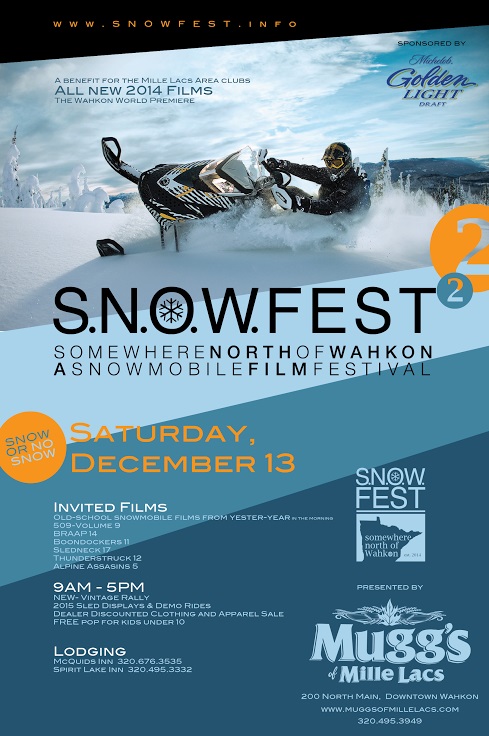 SNOWfest is a celebration of snowmobiling wrapped around a snowmobile film festival. S.N.O.W.fest 2 takes place on Saturday Dec. 13, 2014 in Downtown Wahkon, MN.

“SNOWfest features the best snowmobile action films. This year’s films literally bring the art form to a higher level with tighter chutes, bigger drops, and the best riders in the business, showing how to take no prisoners.”

-Steve Dubbs, event organizer and Chairman of the Wahkon Arts & Film Board.

The invited films are 509 Vol. 9, BRAAP 14, Boondockers 11, Sledneck 17 Thunderstruck 12 and Alpine Assassins 5 with some old school sled movies in the morning. The most popular film will be awarded “Best in S.N.O.W.” trophy or as Dubbs refers to it the “SNOWY”

More than just a snowmobile film festival, there is also a vintage rally in the morning, new snowmobile displays, and demo rides on 2015 sleds. It’s a family friendly day. Admission is free and there is free popcorn and pop for the kids.

Proceeds from the event go directly to the 3 local clubs who maintain over 400 miles of trails in the Lake Mille Lacs Area. The benefiting clubs are the Mille Lacs Trails Club, the Garrison Commercial Club and the Mille Lacs Driftskippers. It’s a party with a purpose.

The event is held snow or no snow. If there is snow, bring your own sled – Wahkon is on the Soo Line Trail, so there is great snowmobiling nearby. Be sure to check out the famous Red Top Loop. The event is sponsored by Michelob Golden Light.

S.N.O.W.fest 2 starts with a vintage show in the morning AND the “Wahkon World Premier” of the best snowmobile films of 2015 in the afternoon. There will be some nice door prizes and silent auction items. No snow? No worries! You may not be able to ride…, but you can still have a great day of experiencing the sport with a vintage show, watching some exciting snowmobile films and gathering with other snowmobile enthusiasts!

10am – 11am ~ Vintage Snowmobile Registration

11am – 3pm ~Dealer Displays and Demo rides (dependent on conditions)

More event and lodging information is available at www.snowfest.info. If you would like more information about this topic, please contact Steve Dubbs at 612.805.4738 or email at jsdubbs@yahoo.com. 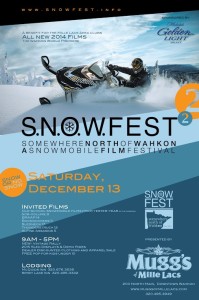 Russ Davis Back to Race Action