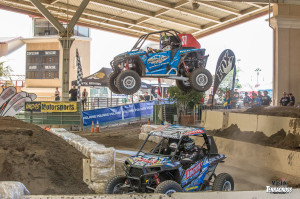 With the first event of the 2014 Mystik Lubricants Terracross Championship in the books it’s time to look forward to seeing Terracross on CBS Sports Network. Editing is complete for the races that took place at the San Diego County Fair, Del Mar Fairgrounds, and air dates have been released. Watch as Superstars, like current points leader Jason Lubrugh, RJ Anderson, Jeremy McGrath, Chad Ragland, Daryl Rath, Doug Gust, Mitch Guthrie Jr, Mickey Thomas and BC Vaught and more battle it out on new courses that take racers to new heights. Literally. Drivers not only race each other but also the course, with jumps over other drivers, over demolished cars and through whoops sections and tires, you won’t want to miss rounds one and two of the Mystik Lubricant’s Terracross Championship.

The air dates are:

Please note, CBS Sports Network has moved from Channel 613 to Channel 221 in the Direct TV lineup.

Mark these dates on your calendar to see all the Mystik Lubricants Terracross Championship action!

Comments Are Due By Monday, February 25, at 4:30 p.m. The Minnesota Department of Natural Resources (DNR) invites the public

Oconto County has a brand new signage system in place for the upcoming ATV/UTV riding season. The new “Locator Signs”