While the very first snowmobiles had a crude direct drive design, it didn’t take long for early pioneers like Joseph Armand Bombardier to introduce the continuously variable transmission or CVT and they have been here ever since. For certain a lot has changed over the years, but the basic principle of a drive and driven pulley has remained the same.

Like many aspects of this sport, tuning the CVT for improved performance quickly followed. Obviously snowmobile technology and factory calibrations have come a long way. With the advent of fuel injection, semi or direct injection and a host of engine monitoring sensors, today’s snowmobiles are more finely tuned and better calibrated out of the box. Clutching calibrations have improved as well, and newfound technology is allowing more of us to tune these once mysterious transmissions with greater accuracy.

With so many improvements, some have asked if the CVT has finally been refined to its limits? While some have been known to shave a few weights and dabble in the science of helix angles and spring rates, it might be best to ask the experts. So here are some of the most respected names in the aftermarket performance and clutching arena to get their take on the current state of the CVT and what the future holds.

• EPI, located in Baxter, Minnesota, has been developing performance clutch kits for snowmobiles, ATVs and UTVs since 1991.

•  Speedwerx in Forest Lake, Minnesota, has been recognized as a performance and clutching leader in the industry for both Arctic Cat and Polaris models. (www.speedwerx.com)

•  TEAM Industries, with headquarters located in Bagley, Minnesota, has developed symbiotically with the snowmobile industry since the 1960s. Today TEAM works with several OEMs in the development and advancement of powertrain components as well as offering an independent line of performance clutching solutions. (www.team-ind.com)

MSPN: A lot has changed in the snowmobile industry from 20 years ago when performance clutch upgrades were extremely popular. How has this impacted your company and more specifically the aftermarket for performance clutching?

EPI: For certain the manufacturers have done a great job of improving overall calibrations, but it still has to cover a wide spectrum of riding styles. The stock set-up needs to perform well for the trail rider, lake racer and everyone in between. That’s a tough order. Given that, companies like ours still have plenty of opportunity to design clutch kits that focus on specific riding styles and applications.

Speedwerx: While the days of huge bolt-on gains are largely a thing of the past, there are still noticeable gains to be had and there are actually some advantages to new highly “tweaked” calibrations coming from the factories. On carbureted machines of the past, we always had to take large temperature and elevation swings into consideration when designing a clutch system. Without making constant and annoying jetting changes, it would be impossible to keep your machine finely tuned for the changing conditions. A clutch kit that was dialed in perfectly on 10-degree day could potentially cause the machines performance to fall off considerably if the temp went up 20-degrees. The new fuel delivery systems have built in compensation parameters for temperature, barometric pressure and elevation that keep the engines air/fuel mixture optimized for any given conditions. This compensation allows us to clutch the machine much closer to the “edge” without worrying about the performance falling off with changing conditions.

TEAM: While the machines have advanced, we continue to find performance advantages especially in certain niches or extreme applications. Mountain riders, racers or aggressive trail riders for example are willing to compromise at one end of the spectrum to gain in others. It has also forced us to develop new technologies that have yet to make it to consumer offerings from the manufacturers. Our new Tied Driven Clutch is one such example that is pushing the boundaries of conventional clutching technology.

MSPN: What are some examples on the advantages and disadvantages with aftermarket clutching technology for today’s snowmobiles?

Speedwerx: In many ways we are still delivering performance gains in similar areas as we always have. Our objective is to take advantage of any performance gains the factory may have left on the table or to design a clutching calibration for a specific application. While the gains aren’t usually as substantial as in the past, we can still find weak spots in production settings with sophisticated data acquisition equipment such as engine dynos, track dynos, on sled data recording systems, etc. This equipment allows us to accurately measure upshift, backshift, rpm, track speed, belt slippage, track spin and anything else that might figure into the equation. We also use higher quality materials in our clutching components such as higher tensile strength spring wire; stronger more durable and balanced clutch weights; and aircraft alloy cam and helix.

TEAM: With engines becoming more and more advanced and thus less responsive to modifications, drivetrain inefficiency becomes the next place to improve performance on today’s snowmobiles. Optimizing clutching for your riding style/weight/location is a great way to improve the performance of your machine.

EPI: For certain, we (the aftermarket) all have found that the factory calibrations have gotten much better, but performance gains still remain by dialing in clutching to perform better under specific conditions. Of course there will always be a trade-off of performance in one area in order to enhance another. At EPI we focus our development on improving the low-mid range performance of a machine, or more specifically, the holeshot, acceleration and backshift. These are typically the areas that most riders look for increases in.

EPI: There really isn’t anyone who is performance minded who wouldn’t benefit from a clutch kit. Of course everyone will ask for a better holeshot, faster acceleration, crisp backshift and more top-end speed while still handling nicely on slow trail rides. Obviously you can’t have it all – there will always be a trade off in some area for increased performance. The bottom line is that on most sleds there is always some room for improvement.

TEAM: One customer who we often see benefiting from clutching improvements are those who modify their snowmobiles. Clutches are great dynos and they indicate a true representation of how much power the machine makes. Sometimes riders complain that clutching improvement didn’t help them. However, more often than not the problem is the snowmobile does not make the power they think it does. If you can’t pull the clutching, you are not making the power.

Speedwerx: If you’re an aggressive rider and like to stay ahead of your riding buddies, it can give you the advantage you need. On the other hand, if aggressive is not your style and your thumb doesn’t hit the handlebar often, a clutch kit would probably be a waste of money.

MSPN: Improving performance remains at the forefront when it comes to clutching and the aftermarket, but have you investigated clutching attributes for other benefits such as fuel economy?

TEAM: Absolutely! As with any system, if you increase the efficiency, you not only obtain better performance during wide-open-throttle conditions, but you will see less fuel consumption during regular riding. One of the projects we are doing this winter is to evaluate the fuel economy improvements on a Ski-Doo E-TEC 600 by changing to our Tied Secondary Clutch.

EPI: For the most part we find that enthusiasts who are willing to spend money on aftermarket products looking for performance gains are willing to sacrifice fuel economy for performance. But you need to keep in mind there are other “economies” to be gained from a clutch kit such as longer belt life due to reduced belt slip and heat.

Speedwerx: Obviously with today’s unpredictable fuel prices, fuel economy has become more of a concern. From our testing we have not seen a clutch kit have a major impact on fuel economy. For the most part, fuel usage is controlled by the machines air/fuel mixture setting and how aggressive you are with the throttle. Much like your car, the best way to get better fuel economy is to back off the throttle. For some of us though, that’s just not an option.

MSPN: How have four-strokes, turbos and advances in fuel delivery impacted clutching?

Speedwerx: Recently, four-stroke and turbo-charged sleds have become a large part of our business. A turbo-charged two-stroke, for example, is one of the hottest performance set-ups going out west. We’ve spent a lot of time working on fuel maps and clutching for these machines. A turbo-charged machine can pose many clutching challenges for a tuner due to the lack of boost at low RPM and the huge power increase that the boost creates at high RPM. With the proper clutch set-up we can minimize turbo “lag” and still harness the big horsepower when the boost comes on.

TEAM: The request for four-stroke and turbo applications are certainly on the rise and clutching them is unique. We spent a lot of time with two four-stroke sleds last winter and learned a lot. This year we have been working with several turbo companies in order to create clutch kits to accompany their turbo kits.

EPI: The introduction of four-strokes and turbo-charging has resulted in engines that have much more torque at low and mid-range and are more forgiving in relation to clutching than a peaky two-stroke. The trade off for this added torque comes at the expense of a lot more heat under the hood. Heat is an enemy to power and speed. A properly clutched sled will run cooler and result in less slippage and longer belt life.

MSPN: Rumblings of the next big things, such as electronic controlled up-shift and backshift, have been rumored and are at play in other industries. Where is the future of the snowmobile CVT headed and how will the aftermarket play a role?

EPI: We believe that the CVT system will be around for many years to come on snowmobiles. It’s a simple, lightweight, inexpensive and proven system that is easy to tune for the applications. The cost involved in developing an electronically controlled system to replace the CVT would drive the already high cost of snowmobiles even higher.

Speedwerx: The future will be interesting to say the least. For more than 35 years, the basic concept and designs of a snowmobile continuously variable transmission have changed very little. We have heard of and seen some of these new design concepts, but have yet to see one function properly in a high performance application. Surely the day will come when we will see motion and position sensors coupled with RPM and throttle position to control clutch upshift and backshift. When these new systems are built, our role will be to maximize their performance and develop products to make them tunable for a wide variety of conditions.

TEAM: You most likely will see the next big thing in clutching come from the aftermarket and not the manufacturers as we are not as cost centered as they are. We believe a closed-loop system of some sort will be available in the not-too-distant future. As a leader in CVT technology, TEAM plans on being at the forefront of such development.

This month’s issue of Minnesota Offroad is now online and ready for download.

Hibbert Unable to Compete at Canadian Motocross National in Regina 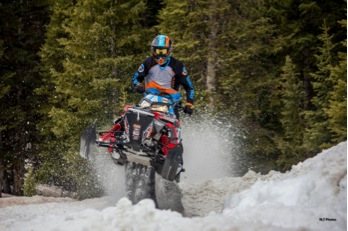 Polaris Hillclimbers Dominate at Crested Butte, Winning 9 of 12 Pro Classes and All Three Pro King of the Hill Crowns