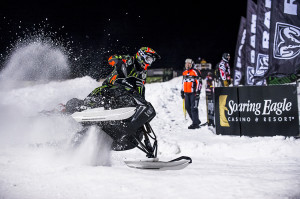 And, prior to Hibbert’s victory, firing up the sizable crowd that braved the cold and high winds was a big win in the Pro Lite class by Team LaVallee/Polaris’ Andrew Lieders.

After pulling a clean Stud Boy Holeshot, Hibbert battled bar-to-bar with sophomore Pro Open class racer Kody Kamm (Hentges Racing/Polaris) through the finish line table top and into the corner leading into the uphill section. Hibbert was passed – cleanly – in the back bowl turn by Kamm and led around the track for the first couple laps by the hard-charging young racer.

“Kody was riding on the edge,” admitted Hibbert, adding that he made a conscious choice to follow Kamm through the downhill section to “see if Kody tripled” (which Kamm did).

With Kamm putting up a 54.7 lap (to Hibbert’s 55.17) on lap two, things were heating up quickly in the 12-lap contest. The situation quickly came to a boil when, on lap four, Hibbert rammed into the back end of Kamm’s sled. Both riders came away without issue, but soon thereafter Kamm would miscalculate the landing of a large tabletop jump and high-sided, rolling his sled on its side and pitching himself into the sugar-like snow.

“It was a bummer for him, he was riding good,” said Hibbert of Kamm. “So from then on I just focused on riding strong and consistent after he crashed.”

With Kamm back up and running in 12th place, Arctic Cat’s Cody Thomsen – running blazing fast all night – moved up from 3rd to 2nd and Friday Pro Open finisher Johan Lidman (Warnert Racing/Ski-Doo) popped up from 4th to 3rd.

Without Kamm (12th) up front the aforementioned racers would spread out evenly, making up the podium the way they stood at the midway point of the race. Hentges Racing/Polaris’ Justin Broberg rode well to place 4th, followed Christian Brothers Racing/Arctic Cat’s Logan Christian in 5th.

“This was a great group effort tonight – I’d really like to thank my entire team,” said an elated Lieders from the top rung of the podium. “Everybody had a hand in this. It’s just a great, great win.”

Starting 2nd (behind Johnstad), Lieders was never challenged after he took the early lead, running up front for seven of the eight laps and winning by nearly five seconds.

Giving chase – in the Pro Lite’s best battle of the weekend – were James Johnstad (Judnick Motorsports/Polaris)and John Stenberg (Team Bauerly/Ski-Doo). Johnstad nailed the holeshot and took the early lead in the race before being passed by Johnstad at the start of the second lap. And noteworthy in the opening lap was Friday’s Pro Lite winner, Corin Todd (Leighton Motorsports/Polaris), got tied up with Michael George (MFG Racing/Arctic Cat) and went down. Todd would remount in second-to-last place and ran the remainder of the Pro Lite main without a seat (finishing 10th).

With Lieders cracking off the night’s fastest Pro Lite laps, Johnstad and Stenberg settled in to 2nd and 3rd, respectively. Pro Lite overall point leader, Andrew Carlson (Carlson Motorsports/Polaris) would move up to 4th place and set his site on the podium – his overall point lead down to a mere seven after Todd won on Friday and Carlson finished 8th.

By lap six Lieders had opened up a 3.5-second lead, while Trevor Leighton (Leighton Motorsports/Polaris) rallied back from a poor start and came out of nowhere to pass Carlson for 4th place. At the same time Stenberg got past Johnstad to take 2nd place.

With Lieders pretty much checked out, the fans’ focus turned to Stenberg and Johnstad, who swapped the lead back and forth on the final lap. Stenberg would edge Johnstad at the tape while Leighton placed 4th and Zak Mason (Leighton Motorsports/Polaris) caught Carlson for 5th.

“He passed me, I passed him – yeah, we had a battle out there,” said Stenberg.

Polaris hasn’t sat on its laurels for the coming year, paying considerable attention to the often-overlooked entry class. Here’s a 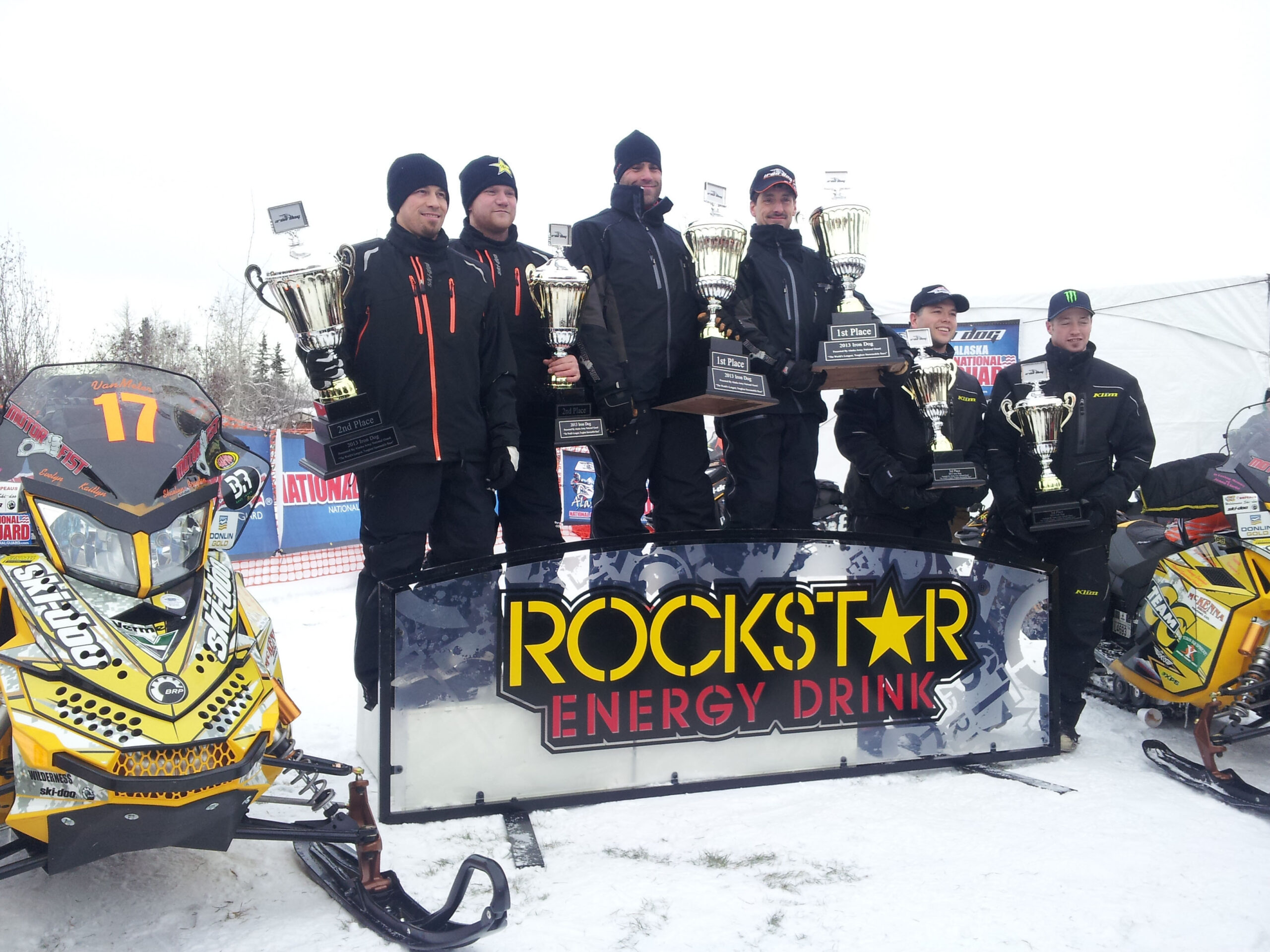