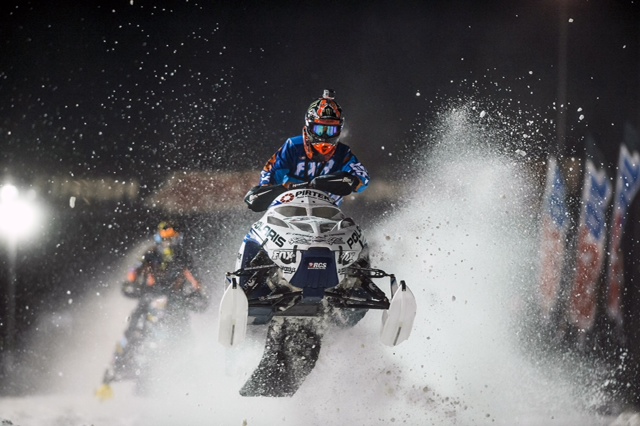 Kamm and Hibbert collide going for the holeshot, Hibbert flies off the track and Kamm holds on for the win; Corin Todd places 1st in wild Pro Lite main

Deadwood, S.D. (Jan. 31, 2014) – AMSOIL Championship Snocross, powered by Ram, saw Tucker Hibbert’s (Monster Energy/Arctic Cat) storybook undefeated season come to an crashing halt on Friday at the Days of ’76 Rodeo Grounds as one of the future heirs to Hibbert’s top spot in the sport of snocross – Wisconsin’s Kody Kamm (Hentges Racing/Polaris) – “bumped” Hibbert out of the way off the start and rode to his first victory of the 2013-’14 ACS season.

And in Pro Lite action at Deadwood Corin Todd (Leighton Motorsports/Polaris) would pull out the victory in an equally wild contest.

If there was one venue where AMSOIL Championship Snocross fans could have marked their calendar with ‘Anybody’s race’ it would have been Deadwood. Hibbert struggled here last year and, given his history with Kamm (the two had an aggressive run-in at the previous round in Shakopee, Minn.), this would be a make-or-break weekend for Hibbert’s run at a perfect season.

With Hibbert selecting the very inside line with the No. 1 gate pick and Kamm lining up right beside him with the No. 2 pick, Hibbert got out a little bit ahead – but was quickly met at the apex of the first turn berm and hit in the side by Kamm, forcing Hibbert off the track. Hibbert would run his Arctic Cat nearly two-thirds of the way around the track before re-joining the field in 10th place.

“Oh man, I bumped Tucker a little bit, held my line,” said Kamm of the incident. Hibbert would be unavailable for comment as of press time.

At the midway point of the 22-lap contest Hibbert had moved up to 4th and was beginning to challenge Pallin for 3rd, but Kamm and Tremblay were gone. And unless something happened, like a wreck, things didn’t look good for Hibbert’s win streak (which stood at 6-0 entering Deadwood tonight).

Kamm and Tremblay would lock up into an intense battle late in the contest, with Tremblay taking the lead from Kamm on the white flag lap. But Kamm held strong – wrestling the lead back from the former champ – en route to 1st place.

“Tremblay passed me on the last lap, but I was able to square him up on the next turn and take the lead back – held on to the end,” said Kamm.

Moments after that back and forth battle, Tremblay would go down, handing 2nd place to Pallin. This would have meant a podium for Hibbert, but the point leader made an uncharacteristic error and was flung off his sled – salvaging a 6th place finish in the end.

“The last two laps were unreal – people going down all over the place. It was just brutal out there,” said Joanis. “I pushed as hard as I could – so happy it paid off.”

In one of the more thrilling, wide open Pro Lite events of the year Corin Todd would rise to the top for the win amongst the carnage, joined by Andrew Carlson ((Polaris Racing/Sportech/PMC) in 2nd and Travis Muller (Warnert Racing/Ski-Doo) in 3rd. The two were rather unlikely podium placers given Carlson ran off the track chasing the holeshot and Muller, the No. 1 qualifier, got tied up Andrew Lieders (LaVallee Racing/Polaris) and got back going in last place.

Leading the race from the early going after coming out in front on the holeshot with Todd and Nick Pattyn (Stud Boy Racing/Ski-Doo) was Judnick Motorsport/Polaris’ James Johnstad. Friday’s winner at the last round in Shakopee, Minn., Johnstad looked to have the race under control when, on lap ten, the Minnesotan unloaded in the rhythm section and smashed his chest into the handlebars of his Polaris – and just like that was out of the race.

Todd, who was riding equally fast and, in this case, a bit more consistent, took over the lead and never looked back, opening up a 14-second lead by the checkers at lap 14.

“There was a lot of carnage out there,” admitted Todd. “It was a long race and I picked lines carefully, tried to keep my head about me and avoid all the trouble. The track came together well and that ended up being a great race.”

Charging from the back of the pack up to 4th, Carlson took charge of 3rd place when Johnstad went down, setting his site on Pattyn – who would also crash (for the second time) and yield his 3rd place podium position to Carlson. Muller would then get by Pattyn on the white flag lap, coming all the way back from last to make 3rd. Pattyn would hold on for 4th in a spirited effort with Kevin Wallenstein (Ingles Performance/Ski-Doo) rounding out the top five.

Next up on the AMSOIL Championship Snocross, powered by Ram, tour is the Sat., Feb. 1 stop at Deadwood, S. D.’s Days of ’76 Rodeo Grounds. 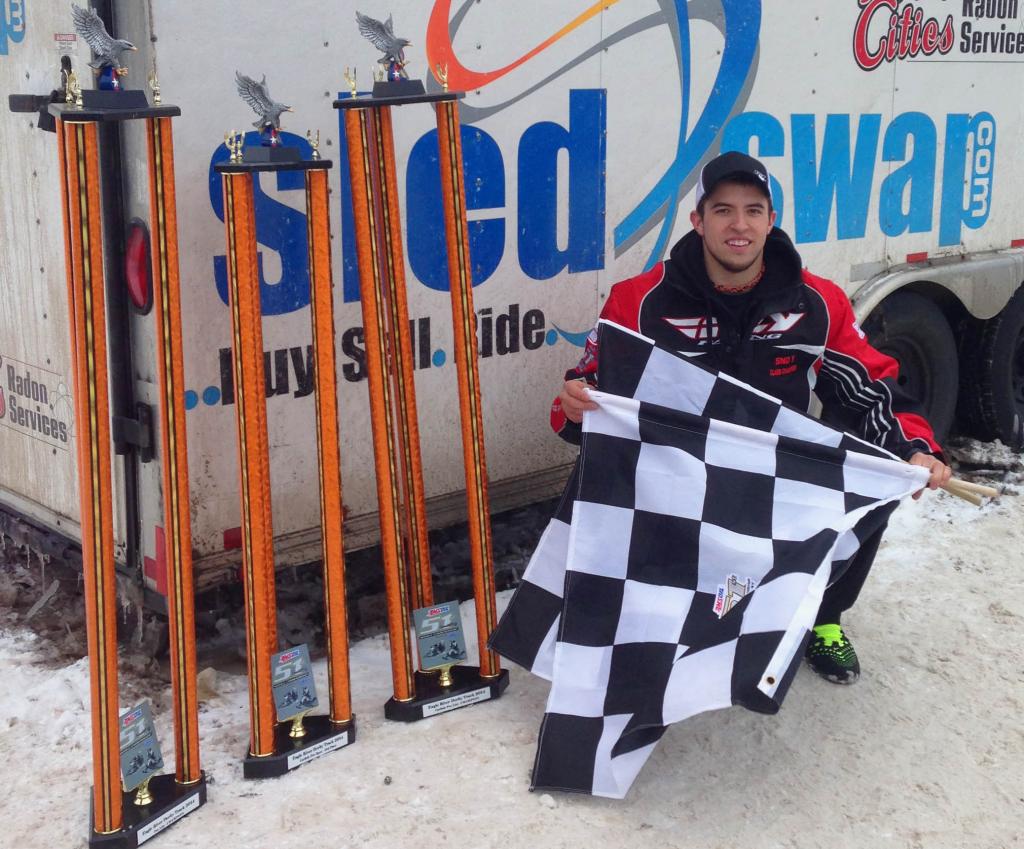 Elk River, Minnesota (January 20, 2014) – With a less than a week left until the impending green flag at 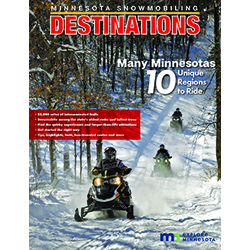 Itching to plan your snowmobile trips this winter? We have the perfect companion. Minnesota Destinations is now available for free 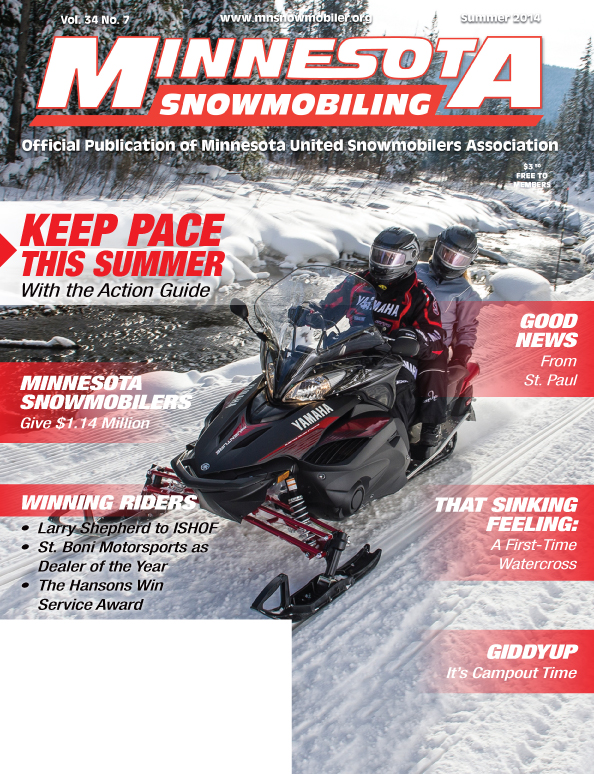 THE SUMMER ISSUE OF MINNESOTA SNOWMOBILING IS NOW ONLINE