Spicer, MN (January 20, 2014) – After three rounds of ice, it’s time to jack up the sleds and hit the moguls for the 2014 Oslo Merchants 100 race this coming Saturday, January 25. The racers on the USXC circuit with a snocross background, like On Snow Magazine Women’s Jolene Bute and Yamaha Pro Stock’s Ryan Simons, have been awaiting the technical timing of a good old fashioned Minnesota ditch line.

The first three races of the year have already established bragging rights for several racers, as well as developing speed setups for the ice portions of the upcoming races. For instance, the Oslo race, as well as the Seven Clans Casinos I-500 will include plenty of river running and the tuning perfected at the lake races will help out a lot in those circumstances.

And speaking of Ryan Simons (Cat), aside from taking a few laps on a four stroke at Willmar, Simons has taken the first three rounds off, citing a bias toward terrain racing. Inserting Simons into the Pro Stock equation ups the ante for everyone. Christian Brothers Racing teammates Zach Herfindahl and Brian Dick have both earned wins so far this season, perhaps it’s Simon’s turn? A few Polaris riders may have something to say about that, however. Last weekend’s winner, Polaris’ Ryan Faust, will be amped up to repeat in round four and the fast, but injured Bobby Menne hasn’t even been in contention yet.

A few riders are still figuring things out and there’s no better time than Oslo to start. Looking uncharacteristically out-of-sorts early on, Ski-Doo’s Ross Erdman doesn’t stay down for long, so expect a breakout weekend from Mr. Erdman soon. Team Yamaha came out in full force this season with a fleet of blue Vipers and a gaggle of competent riders. Corey Davidson was only one spot out of the top five in Willmar and Re Wadena has looked more confident each time out.

The Oslo Merchants 100 is locally sponsored by Gowan Construction, Cenex of Oslo, Johnny Brovoz, Dahlstrom Motors, and Frandsen Bank. The course will be 25 miles of river and ditch, tailor made for old school cross country race lovers. Fans will enjoy a rider autograph session Friday night at Johnny Brovoz’s Bar.

The Oslo Merchants 100 is the last race before the Seven Clans I-500, February 6-8 near Thief River Falls, MN.

USXC Racing is the largest cross-country snowmobile racing organization in North America. The USXC is set to hold eight races during its 2013-2014 race season which runs from December 2013 to March 2014. Follow USXC on Facebook or visit www.usxcracing.com for more information, registration, news, and race results. 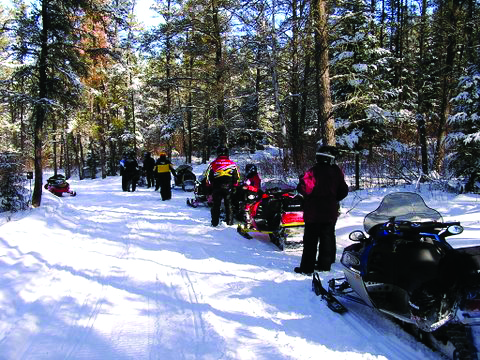 A RIDE IN THE WOODS: PARK RAPIDS, MN*

Depending on who one talks to, the Park Rapids, Minnesota, area is either the state’s best-kept snowmobiling secret or the

With two weeks of testing and tuning between Pine Lake and Detroit Lakes, drivers came out in full force with