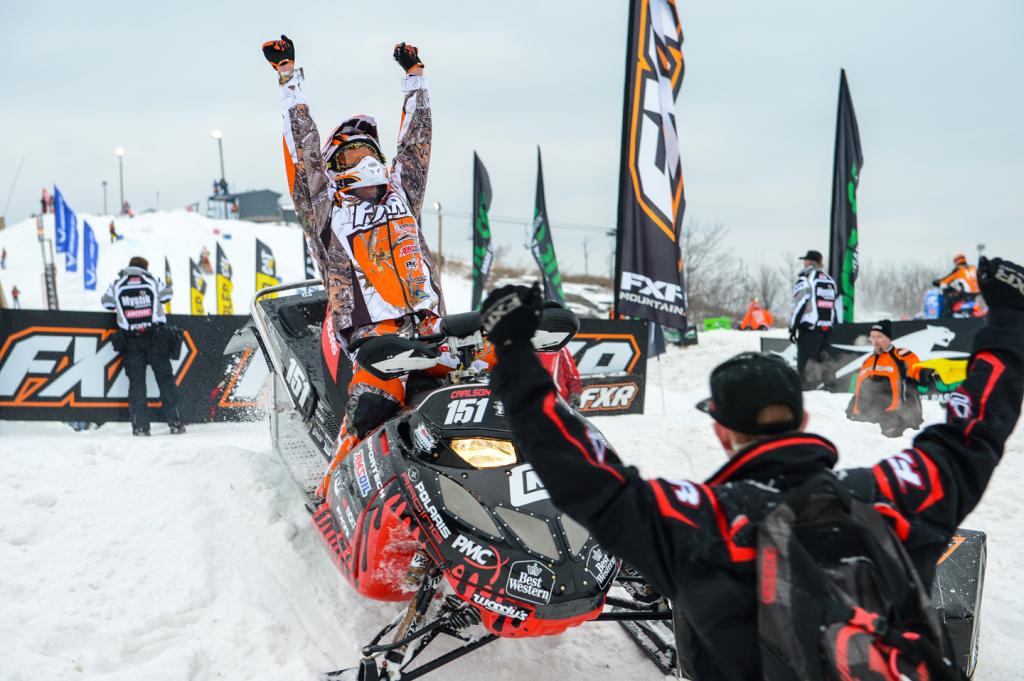 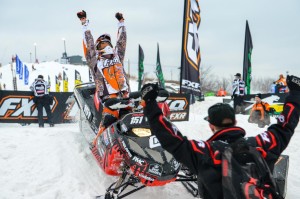 Duluth, Minnesota (December 2, 2013) – Andrew Carlson returned to national snocross competition in both a dramatic and dominating way; finishing second Saturday evening and besting the field for the win on Sunday. It was a gritty and determined effort by Andrew, as well as the entire Carlson Motorsports team, as he battled back from a serious knee injury suffered at Clash of Nations last spring, to win the biggest race on the national tour just 7-months later.

As Saturday dawned, the team’s attention turned to Pro-Lite competition and the efforts of Andrew Carlson and Marcus Johansson. The team’s Polaris buggies were blistering fast, generating first to the turn holeshots virtually every time they left the line. That kind of acceleration allowed Carlson to go 1-2 in qualifying and Johansson to follow with a 2-3 effort; good enough to put both riders on the front row of the final. In the final, Carlson settled in behind eventual winner James Johnstad, and Johansson picked-off riders following Carlson’s adept line choices to give the teammates a 2-3 finish at the checkered.

The jubilation, pride, and tears of happiness were evident as both Carlson Motorsports’ riders stood on the podium. For Andrew and his family specifically, it was a triumphant return to competition, and more importantly, a well-deserved reward for seven long months of rehab and unwavering focus and commitment towards winning. Yet, it was only the beginning.

Sunday’s grey overcast sky revealed a gnarly Duluth track, one that many racers viewed as the longest and toughest ever for the famed venue. The duo of Carlson and Johansson however appeared unfazed, fueled by the previous evenings taste of success, they both once again qualified for the front row of the Pro-Lite final.

Faced with 14-laps in the main event, Andrew Carlson settled in at the line and envisioned a line up the nasty uphill backstretch. When the light blipped green, Carlson left the line and the rest of the field with cannon like speed…he never looked back. The flag-to-flag dominating performance earned Carlson his first Pro-Lite podium…and most assuredly, not his last.

“I’m so pumped right now,” said a beaming Carlson atop the podium. “Everyone has worked so hard to get here…the team…my family…our sponsors…I can’t thank everyone enough.”

“I’m not sure I can find the words to describe how proud I am of this team,” said team owner and proud father Chris Carlson. “Andrew showed to me this summer just how serious he was about winning with his commitment to come back from injury…now he showed everyone else.”

Both Chris and Andrew were quick to thank the commitment and support of the team’s sponsors including AMSOIL, FXR Clothing, PMC High Performance Plastics, Best Western, Woody’s, FOX, and others. “Many of them (sponsors) have been with us for a long time,” said Carlson, “and their support has remained unwavering. It feels great to repay them in some small way with this victory.”

The AMSOIL Championship Snocross tour continues December 6-7 at Bessemer, Michigan. You can follow the Carlson Motorsports’ efforts on Facebook or at www.carlsonmotorsportsllc.com 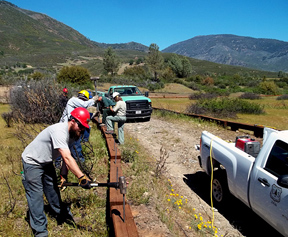 Stonyford, CA (April 22) Three groups of trail volunteers were fully engaged on the Mendocino National Forest this past weekend