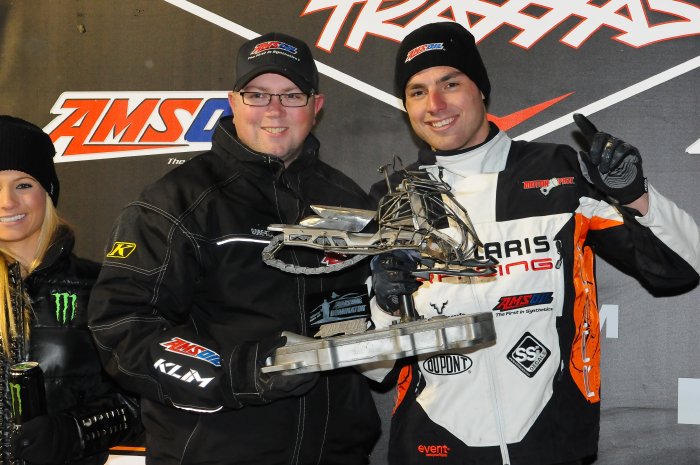 Duluth, Minn. (Nov. 22) – AMSOIL Polaris Snocross rider Ross Martin has been dreaming of a three-peat in the prestigious AMSOIL Dominator race all summer long, and as the first event of the AMSOIL Championship Snocross series approaches next weekend on Spirit Mountain, he knows it’s time to get to work.

The AMSOIL Dominator is a special race held the Friday of the AMSOIL Duluth National presented by Bully Dog, and Martin has won it both times the event has been contested.

“It’s always an exciting deal,” Martin said. “We’ve won it two years in a row, and we’ll try to win it again next Friday. Hopefully that will give us some momentum and we can get on the podium a few times over the weekend, if not sweep the Dominator and the two regular season events.”

The AMSOIL Dominator pits riders in head-to-head competition in two-lap sprints instead of all riders racing at once. Run tournament style, winners from the first round advance to the second round, then to the semifinals and final, where the race winner is determined.

And while Martin wants to keep his AMSOIL Dominator winning streak alive, he’s also looking at the two Pro Open national events that will be held Saturday and Sunday as part of the kick-off to the 2013-14 season. Martin finished second in the Pro Open points standings last season for Judnick Motorsports, so he knows getting off to a good start can be vitally important for the upcoming campaign.

“I’m super excited to get going,” Martin said. “We recently tested in Aurora (Minn.), and the AMSOIL Polaris is working great. I’m feeling good, and I can’t wait for the first race. I wish it was tomorrow.”

Martin has other reasons to be ready for the race, as team co-owner Scott “Juddy” Judnick hails from Duluth.

” ‘Juddy’ grew up not far from here, so it’s a pretty special race for him,” Martin said. “Lots of friends and family will be there, for sure, and we’ll want to put on a good show for them.

“Spirit Mountain always has a really good track. We’re coming off a long summer, and I know everybody is anxious to get back going. Everyone is healthy, and it’ll be exciting to see what everybody brings to the table.”

Pro-level practice and qualifying action, along with amateur-level racing, takes place throughout all three days of the event with gates opening at 8 a.m., Friday through Sunday. The pre-race ceremony for the AMSOIL Dominator is slated for 5 p.m., Friday, with Race 1 of the AMSOIL Championship Snocross series beginning at 5 p.m., Saturday. Race 2 will start at noon, Sunday.

Get the Latest Tucker Hibbert Gear

Light Up Your Night with Auxiliary Lighting from BRP

Valcourt, QC – BRP brings yet another industry first to the snowmobile market with integrated auxiliary lighting for brighter night