Elk River, Minnesota (October 4, 2013) – A championship racer needs a championship team, and this off-season Carlson Motorsports took a major step towards that ultimate end-goal when FXR Racing and Premier Material Concepts (PMC) both became primary partners for the 2013-2014 season.

While it’s not unusual for many of today’s national caliber snowmobile racing teams to have an outerwear company as one of their key sponsors, the newly formed partnership between Winnipeg based FXR Racing and Carlson Motorsports is looking to take the relationship beyond big decals and pit crew jackets. The partnership between the two organizations is a reunion of sorts between Chris Carlson (owner and president of Carlson Motorsports and Sportech Industries) and FXR founder and president, Milt Reimer. With parallel roots within the snowmobile industry, both entrepreneurial founded organizations are looking to extend the relationship beyond the racetrack in a collaborative effort to bring greater value to the FXR brand.

“I first met Milt “back in the day” when we were both launching our companies and working the consumer shows,” said Carlson. “I’ve watched him build his company through innovation, quality, and customer satisfaction, and he’s done it with a level of integrity and passion that mirrors our approach at Carlson Motorsports and Sportech.”

Carlson recently spent time with Reimer at Haydays this past September, and was immediately drawn to his strategic vision for new products, aggressive approach to market, and the future of FXR.

“I’m excited to work with Milt and his team,” said Carlson. “Together we’re already looking at ways to combine resources and collaborate on future projects…this is exactly the kind of entrepreneurial partnership we enjoy most at Carlson Motorsports.”

Milt Reimer was equally excited about the new relationship between the two companies. “They (Carlson Motorsports) are true professionals, and we (FXR Racing) are proud and excited to be a part of their organization. I’m making plans to visit with Chris soon and learn more about his engineering and design teams and see where this relationship takes us.”

Joining FXR Racing on the side of the Carlson Motorsport hauler this season is returning sponsor PMC. A highly regarded extrusion manufacturer within the plastic thermoforming industry, PMC joined Carlson last season and immediately became an active member of the high-energy team.

“Our entire company instantly became snocross racing fans,” said PMC/Rowmark President and Chief Executive Officer Duane Jebbett. “Our involvement with Chris and his team energized both our employees and our customers. We had nothing but a positive experience, and we (PMC) wanted to take it a step further this winter.”

Both PMC and FXR will be touted as title sponsors this year for the Carlson Motorsports team, gaining top level exposure at every turn with the team, and perhaps more importantly, becoming an integral part of a collaborative effort to combine resources and bring success with measurable resources for both brands.

The International Series of Champions national snocross tour kicks off November 29-December 1 in Duluth, Minnesota. You can follow Carlson Motorsports on Facebook or at their website: www.carlsonmotorsportsllc.com 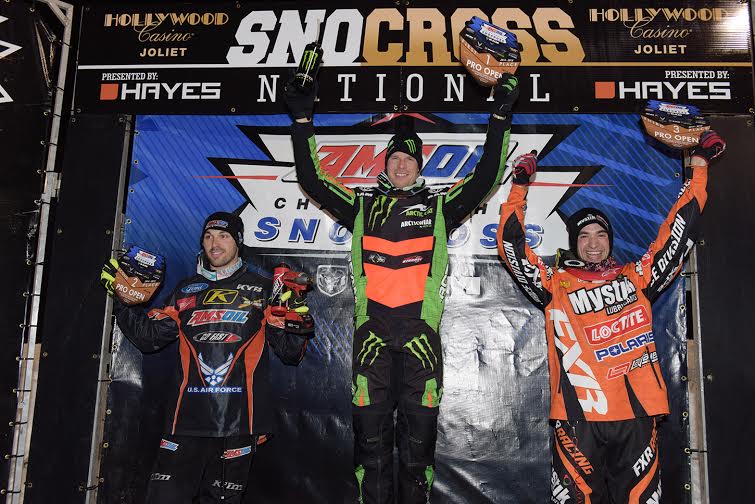 The latest issue of Wisconsin Snowmobile News is now online, for free viewing and download. Check it out for features including:

The March issue of Minnesota Snowmobiling is now available for free download. Want it delivered to your mailbox at the beginning of each month? Join a snowmobile club and become a member of MnUSA!