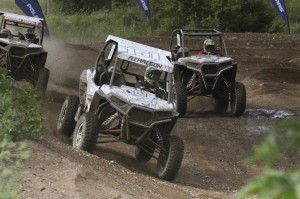 Elk River, Minnesota (August 21, 2012) – The best off-road, closed course racers in North America descended upon the obstacle littered TerraCross course in Elk River, Minnesota for a double-header weekend. Carlson Motorsports riders emerged from the dust and mud with a pair of podium finishes; a victory in Pro-Am for Ryan Springer, and a hard fought second place finish in Pro for Andrew Carlson.

After putting the competition on alert last year in the inaugural season of TerraCross, where Carlson went 1-2 in the opening weekend, event promoters bumped Carlson into the pro ranks for 2013, where he faced top off-road racers including Zakowski, Gust, Creech, Rath, and current west coast racing phenom RJ Anderson. Carlson proved he was more than ready for the task, as he guided his AMSOIL Polaris RZR with blistering speed around the ERX TerraCross course; and survived the mayhem that ensued in the 10-lap final to finish on the podium, just behind Anderson.

“That was a crazy race,” Carlson said after stepping out of his RZR and wiping a dusty smile from his face. “There were cars upside down, stuck, broken, and banging on each other all over the place. When I flipped upside down, I figured my race was over, but I just pushed through it, and when I crossed the line in second I was pumped.”

The chaos on the track was telling of both the level of the competition and brutality of the track and race conditions. A combination of a high-speed track, sprinkled with sharp hairpin turns and 15 vehicles on the track at one time, the final was a high-intensity free-for-all from start to finish. For Carlson it just further cemented his never quit racing attitude that has helped fuel his desire to compete at the highest level no matter the season.

Young upstart Carlson Motorsports driver Ryan Springer, picked up where he left off in snocross competition – driving with unabated speed from start to finish. Springer captured the win in the highly competitive and entertaining Pro-Am side-by-side division. Springer looked to be the favorite to win both finals, but a mechanical in the opening lap of Sunday’s Pro-Am main event, cut those hopes short.

Early in the season, Carlson had been honing his racing skills with continued side-by-side competition. Those efforts have been on display Thursday nights at Carlson’s home track at ERX Motor Park in Elk River, and this past Thursday, Carlson locked up the year-end championship without even setting foot on the track, collecting enough wins early in the season to cushion his year-end total.

Next up for the Carlson/Springer tandem is the TerraCross Championships, September 7th and 8th during the Sno-Barons Haydays World Championships near North Branch, Minnesota. For more information on the TerraCross series visit their website at www.terracrossracing.com. For more information on the ERX Motor Park facility in Elk River, MN visit www.erxmotorpark.com

Kevin Farr Appointed to Polaris Industries Inc. Board of Directors

This month’s issue of MN Offroad is now available. Don’t miss the summer issue featuring all this and more: Trails