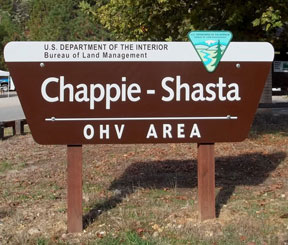 Redding, CA (March 25, 2013) — Leadership and collaboration emerged as key tenets in a meeting of a California commission that addresses OHV recreation in public lands.  The Off-Highway Motor Vehicle Recreation Commission (OHMVR) toured the BLM’s Chappie-Shasta OHV area on March 22 and held a formal public hearing in Redding on March 23.  The OHMVR Commission and Division are part of the California Department of Parks and Recreation.

The new California State Park Director, General Anthony Jackson, attended both the tour and hearing.  General Jackson set the tone for the event by stating that you cannot lead when you are sitting behind a desk.  Three newly appointed OHMVR commissioners were also in attendance.  Local land managers, user groups, city government, and other stakeholders attended the meetings.

During the field tour, participants were able to see the incredible job the BLM has done in providing a world-class OHV area that offers high-quality motorized trail experiences, preservation of historic landmarks, and conservation of natural resources.

Many OHV-related project and issues were addressed during the formal hearing.  Several of the topics covered include the potential for California to opt-out of the National Recreational Trails Program, an effort to re-launch  the California Statewide Motorized Trail System, and support for a zero-emissions urban OHV park near San Jose.
Don Amador, Western Representative for the BlueRibbon Coalition, states, “I think the tour of the Chappie-Shasta OHV Area provided the attendees an excellent example of how the California OHV Program works with its federal partners to provide environmentally-sound motorized recreational opportunity.”

“I think having General Jackson attend both the field tour and hearing showed his commitment to lead from the front instead of sitting behind a desk. There is a new tone in Sacramento at California State Parks and that is just as refreshing as the cool mountain air that flowed down on the tour from nearby snow-capped peaks,” Amador concludes.

Your comments are needed on the Consumer Product Safety Commission’s proposal to ban passengers on ATVs!  ATVers have until November