Denver, CO (March 25, 2013) – Multiple use trail users praised a federal court decision rejecting an effort by anti-access preservationists to close 14 southwestern Colorado trails to motorcycle use. The decision was issued Friday, March 22, by Chief U.S. District Judge Marcia Krieger in a lawsuit brought in early 2012 by the Backcountry Hunters and Anglers, Colorado Chapter against the U.S. Forest Service.

The trails in dispute were prized single track like the Calico Trail which have been treasured routes for decades to a broad spectrum of users, including motorcycle riders. The trails are found in what is known as the Rico West Dolores area of the San Juan National Forest.

A number of other interests weighed in during the suit. Supporting the agency as defendant-intervenors were the Telluride and Durango based Public Access Preservation Association and the San Juan Trail Riders, along with the Colorado Off Highway Vehicle Coalition, the Trails Preservation Alliance and the BlueRibbon Coalition (“Recreation Groups”).

“We are pleased by not only the outcome but the Court’s solid legal analysis and common sense,” stated Paul Turcke, counsel for the Recreation Groups. “The Court properly understood that the plaintiff here was aggressively trying to use a Forest Service decision eliminating cross-country motorized travel as a weapon to impose a narrow preservationist view on the much broader spectrum of users who enjoy these trails,” Turcke observed.

Others supported the plaintiff by filing “friend of the court” briefs, including San Juan Citizens Alliance, and a group including the Town of Rico and Dunton Hot Springs, LLC represented by the resort’s lawyer. Dunton’s filings complained about continuing motorcycle use, while boasting of continuing recognition as a top 10 worldwide “wilderness” resort by authorities like Conde Nast.

The plaintiff sought a preliminary injunction in the early stages of the case, contending that irreparable harm would occur to wildlife and other resources in the vicinity of the trails. Their motion asked the Court to immediately close the trails upon snowmelt in early June, 2012. The Court was unpersuaded by these claims, and — in a May, 2012 telephonic hearing — combined the preliminary injunction motion with the merits, directed the parties to fully brief the case, and ultimately rendered its decision without further argument.

Gary Wilkinson with the San Juan Trail Riders said; “Perhaps this decision will allow trail users to work more closely together as an alternative to litigation. These trails have been enjoyed by motorized and non-motorized enthusiasts for decades, and hunting should not be the excuse to drive a wedge between Colorado’s trail users. Both hunters and trail users need to unite against radical critics and work together for active and effective management,” Wilkinson concluded.

PAPA is a regional recreation group that supports and champions access and responsible use of public lands, and encourages individual environmental stewardship. PAPA’s Mission is to promote balanced, unbiased, responsible use of public lands in collaboration with recreational users of all interests, advocating respect, education and conservation of the environment. Learn more on the web: http://www.papatelluride.org/

The mission of the SJTR is to improve opportunities for off-highway vehicles and assure the best care of the land. SJTR promotes active participation in OHV trail management and other civic activities and maintains a focused and ongoing dialogue with the San Juan National Forest and other public land planners. SJTR educates OHV users about “Tread Lightly” conservation practices and other trail use issues. Learn more on the web: http://sanjuantrailriders.org/

The Trails Preservation Alliance is a nonprofit organization dedicated to protecting the sport of motorized trail riding, educating all user groups and the public on the value of sharing public lands for multiuse recreation, while protecting public lands for future generations. Learn more on the web: www.coloradotpa.org

COHVCO is a nonprofit organization whose member enthusiasts, organizations and businesses collectively comprise over 200,000 Coloradoans and regular visitors to Colorado and other western states who contribute millions of dollars and thousands of hours annually to off-highway vehicle recreation through registration fees, retail expenditure, project participation and related support. Learn more on the web: www.cohvco.org

Your guide to Race, Rally and Radar Runs for the year is now online! Click here to get the details 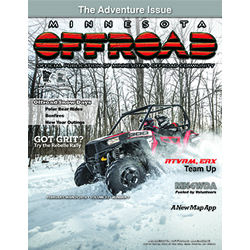 Get the most recent issue of Minnesota Offroad, now available for free download. Features include:  -ATVAM and ERX Team Up