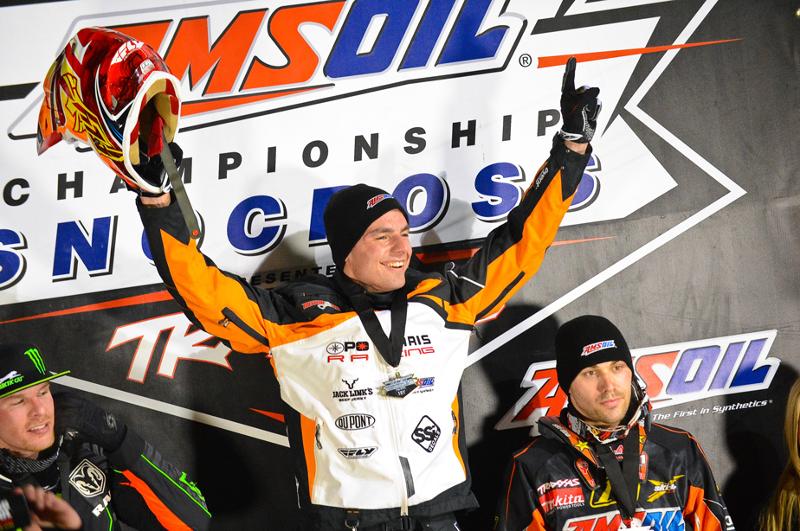 It was without a doubt the most exciting snocross racing ever on Saturday at the Grand Finale in Lake Geneva, WI. 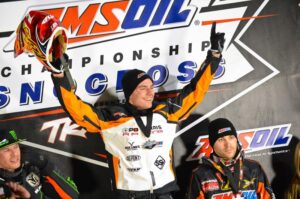 March 19, 2013 – Lake Nebagamon, WI. Ross Martin (Geneva’s hometown hero) was on fire! The fans were on their feet going ballistic as Martin won every time he hit the track. As the number 1 qualifier, he had first pick on the line for the Pro Open Final. Ross exploded off the starting line straight up the hill, pulling the Stud Boy Holeshot and setting a blistering pace. It was an intense battle the first couple of laps with several competitors trying to take Martin, but he held the lead and pulled away from the group lap by lap. But about the second to last lap, Hibbert emerged from the pack closing the gap and coming up on Martin’s tail. It was a cat and mouse game with Martin keeping the slight edge until the final corner just before the checkered. With everyone on their feet, they came out or the final corner side by side. It was a pure power drag race to the finish line and all 12,000 fans were screaming while Ross took the checkered for the Pro Open win.

Scott Judnick, Judnick Motorsports Team owner said, “We could hardly get through the fans to get up to the podium. In my 16 years of snocross racing, I have never seen anything like it! Even Roger Skime, Vice President of Snowmobile Engineering with Arctic Cat Inc. said in the 50 years he has been in the industry, this was the best race he’d ever seen! What an amazing way to finish the season. I am very proud of our team.”

There is little downtime though. We are up at the ERX Motor Park for the next week or two testing for next season.

A huge thanks to our incredible sponsors who make this all possible!

Make sure to catch the action or set your DVR on CBS Sports Network. For the intense action from Lake Geneva tune in April 14, at 10:30 am EST.

Sunrise Township, Minnesota – Just when you thought the horsepower unleashed at the Sno-Barons World Championship Grass Drags and Swap