Polaris hasn’t sat on its laurels for the coming year, paying considerable attention to the often-overlooked entry class. Here’s a first look at the big news for 2014.

The success of the return of the Indy this winter is undeniable. The virtues that made the Indy a hit the first time are all there: value, performance and fun. So what do you do for an encore in 2014? How about a bigger Indy? The Indy SP 800 combines the performance basics such as FOX shocks and a low profile 1-inch Hacksaw track with the more beastly 800 Liberty twin.

The Polaris Indy line has expanded beyond performance for the coming winter with the introduction of the light utility 600 Indy Voyager with 144-by-2-inch track and standard utility rack. You can also find the Voyager with the fan-cooled 550 motor under hood. 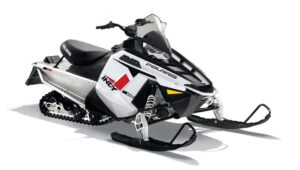 The biggest news for Polaris in 2014 is found at the bottom of the performance chart with a dramatic upgrade expansion of their fan-cooled offerings. Often an overlooked segment in today’s snowmobile environment, Polaris pulled-out all the stops with the all-new 550 Indy. Based upon the cast Pro-Ride chassis, the new 550 Polaris is said to be nearly 50 pounds lighter than the older IQ version and features new clutching, new lightweight exhaust and the nimble handling of the Indy platform. Joining the short-track version are three 144-inch versions: a solo touring Adventure, a two-up LXT and the utility-based Voyager.

Stonyford, CA (April 22) Three groups of trail volunteers were fully engaged on the Mendocino National Forest this past weekend