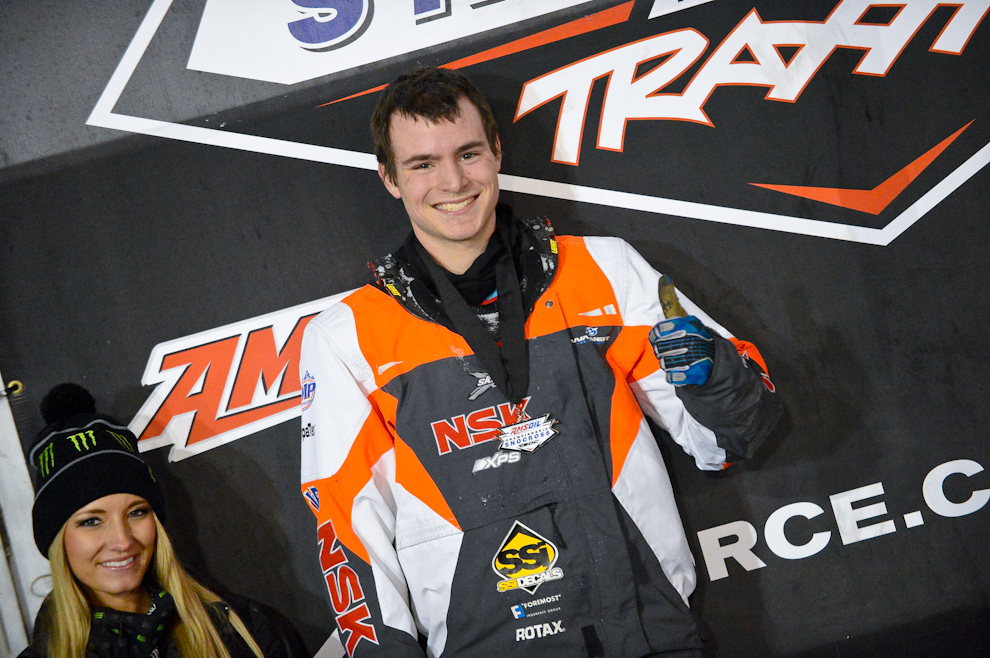 ST. CLOUD, Minnesota – During the course of a season that includes non-stop testing, travel and 16 rounds of competition, consistency can be one of the most valuable traits a race team can possess. Over the last several weeks, Warnert Racing team riders Emil Ohman and Travis Muller have been as steady as any on the circuit, finishing in the top five again last weekend in Salamanca, New York gaining valuable spots in the championship chase.

Emil Ohman started Friday’s main event in fifth place and was able to work his NSK/Ski-Doo as high as third in the middle stages of the 24 lap main event before slipping back to finish fifth overall. On Saturday, Ohman improved his qualifying efforts with 3-2 finishes and then made a strong charge in the main event where he raced from ninth place at the start to fourth at the finish. The track on Saturday became extremely rough and Ohman’s fitness really shined in the final three laps where he advanced three positions.

Ohman has now climbed to fifth in the Pro Open standings, which is his highest position this year.

It was an excellent weekend all the way around for NSK/Ski-Doo Pro Lite racer Travis Muller. Muller never qualified outside of the top 4, including one heat race win and two seconds. In Friday’s final, Muller started seventh but used a fast inside line of the first straight to quickly advance to third. On lap nine of the 16 lap main event, he moved into second where he was able to hang on and claim the second step on the podium.

On Saturday, Muller was boxed out on the start and had to charge from 12th place. Picking off nearly one rider per lap, Muller made it all the way back to 4th place at the finish, collecting valuable championship points as he now sits third overall in the class and is within reach of the leader with two weekends to go.

Up next is the RAM Trucks National in Glyndon, Minnesota on March 8-9.

Light Up Your Night with Auxiliary Lighting from BRP

Valcourt, QC – BRP brings yet another industry first to the snowmobile market with integrated auxiliary lighting for brighter night

Exciting news as NSSR headed to a fantastic event in Chetek, Wisc. at the Chetek Winterfest which was held in conjunction with the Outlaw Snow Drag Racing! National Straightline Snowmobile Racing held its fourth race of the NSSR 2018 Super Series for the “Fastest Show on Ice.”