Yamaha FX Nytro RTX snowmobiles came out of gate fast and furious to start the 2013 cross-country racing season with a win and a pair of top-five finishes in key classes at the inaugural United States X-Country (USXC) Pine Lake 200 in Gonvick, Minnesota on December 15-16.

The 50-mile Semi-Pro Final was held on Sunday, with Ben Lindbom and Jake Muller both qualifying well on their FX Nytros. At the start Lindbom grabbed the holeshot and led the race literally wire to wire, putting more distance between his Yamaha and any pursuers with each lap. At the finish, he was over a minute and a full mile a head of the nearest competitor. Meanwhile, Muller likewise had a great race going, charging up to third place and looking set for a podium finish in his first full season in cross-country racing for Yamaha. But a minor chassis issue scuttled his plans on the final lap and a potential 1-2 Yamaha finish.

Race distance for Saturday’s Pro Open Final was a grueling 103 miles on the Pine Lake ice surface. And just as in Sunday’s events, it was heads-up competition with each row of competitors launching simultaneously. Yamaha Factory Racing’s Ross Erdman ran as high as fourth in the early going, with newcomer Wadena in fifth and Lindbom (Semi Pro drivers are allowed to race two Pro races to gauge talent) charging behind them from a second-row start. But the Yamaha teammates’ race order turned upside down at about one-third distance as Erdman had a minor crash, dropping downfield to ultimately finish seventh. That left Wadena and Lindbom to chase the leaders on their FX Nytros, with both riding strongly to claim top-five finishes in the fastest race on the 2013 USXC calendar.

“This weekend proved how fast our sleds really are at 112 mph – the FX Nytro RTX was definitely the fastest buggy out there” said Yamaha Factory Racing’s Eric Josephsen. Josephsen also recognized Brian Strawsell, Yamaha’s snowmobile racing technical coordinator, for all of his efforts on behalf of the team. “Brian has been the driving force behind the FX Nytro on the track since we brought it out in 2008 – we simply couldn’t do it all without him.” Josephsen noted.

Yamaha snowmobile racing videos can be found on YouTube at www.youtube.com/YamahaSnowmobilesUSA. 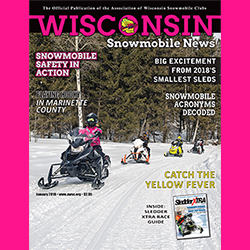 This month’s issue of Wisconsin Snowmobile News is now online, for free download. Check it out for features including:  -Snowmobile

New models. Same passion. The 2015 snowmobile lineup from Arctic Cat® is out. And it’s a good one. Check out one

Carlson Motorsports and PMC Team Up for 2013 National Snocross Season

Elk River, Minnesota (November 19, 2012) – The passion for competition and the desire to win burns deep within most