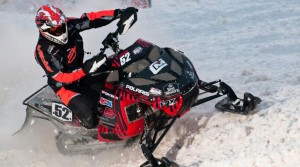 Elk River, Minnesota (December 11, 2012) – Just keep pushing, and good things will happen; that was the attitude within the Carlson Motorsports organization week after week last season and after the opening round in Duluth this year. That positive attitude finally delivered in Bessemer, Michigan where Pro-Lite athlete Andrew Carlson broke through for his first ever Pro-Lite National podium in convincing fashion.

In fact, both Carlson and Pro-Lite teammate Marcus Johansson delivered front row qualifying efforts, lining up side-by-side as each scored a heat win earlier in the day. At the start of the Pro-Lite final, it was Carlson beating the thick of the pack off the line with his Arctiva Amsoil Polaris, and then leaping past David Joanis on the “Dirty-Dozen” downhill with a near perfect line, and a triple to make the pass at the base of the hill.

The Bessemer track had already developed a rough and tough reputation from last year for its pair of nasty downhill sections. Steep in nature and littered with deep holes, even the very best riders were being bucked from their sleds while bombing the downhill. Carlson however stayed strong throughout the entire final, eventually succumbing to Pro-Open Canadian Snowcross rider Joanis; and again late in the race where a slight miscue slipped Andrew to third at the line. Teammate Marcus Johansson got hung up in traffic early on and was forced to back-mark much of the race, finishing 11th.

“My sled was a rocket off the line this weekend,” said a beaming Carlson who was surrounded by the entire Carlson Motorsports team and family.  “I made a few mistakes that cost me those positions, but it feels so good to finally be standing here.”

Perhaps no one was more proud than Andrew’s father and team owner Chris Carlson. “The pressures off,” said Chris as he watched Andrew stand on the podium. “We knew if we kept pushing and stayed positive that we could do well at this level.”

The momentum from Friday night carried into Saturday for round four action. While Pro-Open rider Johan Lidman was hampered by a questionable ruling during qualifying on Friday that took him out of contention, it didn’t slow his continued improvement in the sports premiere class on Saturday. With a pair of hard fought third place finishes in qualifying, Johan lined up against the worlds best riders on the front row for 20-plus punishing laps Saturday evening.

Running consistent laps and battling with heavy hitters and past national champions including Hibbert, Martin and Malinoski, Lidman crossed the line in 6th, completing one of his strongest outings of his young career.

“It’s all about momentum and staying positive,” said Chris Carlson as the team loaded up their 53-foot hauler. “We have built a team backed by incredible partners. Organizations like Polaris, Best Western, Dragon Racing Fuels, PMC Performance Plastics and FOX Racing Shox are first class partners, and this year we have the equipment and talent to bring home results every weekend.”

The team will now take a break, enjoy the holidays with family and friends, and practice plenty at their hometown track – ERX Motor Park in Elk River. The next national is slated for January 4-5, 2013 at Canterbury Park in Shakopee, Minnesota. For complete details on the national tour, broadcast times on CBS Sports Network, and live event streaming, visit www.isocracing.com 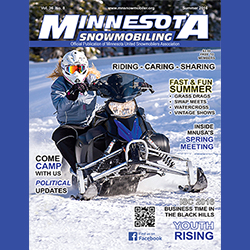 Snowmobiling is a year round sport, which is why we’re pleased to announce that the summer issue of Minnesota Snowmobiling