December 10, 2012 – Monster Energy/Arctic Cat’s Tucker Hibbert nailed a near perfect weekend at Blackjack Ski Resort in Bessemer, Mich. The third and fourth round of AMSOIL Championship Snocross (ACS) featured one of the biggest, roughest tracks in ACS history. Hibbert won three of four qualifying rounds and commanded both final events.

Friday night, Hibbert swept the qualifying races and with a flat-out freight train of a run in the final, he won his first main event of the 12/13 season by 32 seconds. He started Saturday with the same domination but while leading his second qualifier, he cased a roller on the deep downhill section and lost control only one corner away from the checkers. With a 1-4 qualifying score, he was awarded seventh pick for the 15-rider final. He chose a make or break starting position by lining up on the far outside. He railed the first corner, roared up the hill and never looked back to capture his first final event sweep since the 10/11 season.

Hibbert entered the weekend fifth in the Pro Open points championship. He cut over half the deficit and now sits second with 155 points, just 10 points behind leader Robbie Malinoski. Next up for Hibbert are ACS rounds five and six at Canterbury Park in Shakopee, Minn. January 4-5.

“It’s awesome to sweep a race again. I haven’t felt this good in awhile. We (the team) have all been working overtime for months. I’m so proud to have such a hard working crew. They deserve these wins.

This track was so much fun to race on. It constantly changed throughout the weekend, which kept it exciting. It’s the coolest feeling in the world to be out front on a challenging track and pushing to find ways to go faster each and every lap. This weekend reminded me why I do this.

We have no plans of slowing down and will dive into more testing right away. We’re focused on showing up at Canterbury even stronger.” 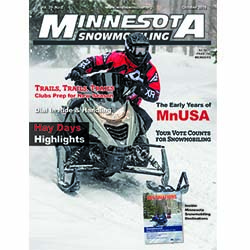 This month’s issue of Minnesota Snowmobiling is now online, available for free download. Get it now for the latest news