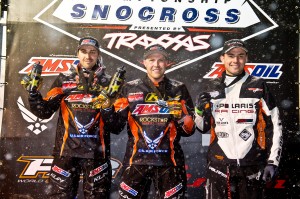 DULUTH, Minn. (Nov. 24, 2012) – AMSOIL Championship Snocross, presented by Traxxas, kicked off its 2012-’13 season in front of a massive crowd at Spirit Mountain on Saturday for the Duluth National, presented by Bully Dog. And taking top honors in the Pro divisions were Ski-Doo racers Robbie Malinoski (Pro Open) and David Joanis in Pro Lite.

With limited natural snow officials with International Series of Champions (ISOC) and the veteran snow making crew at Spirit Mountain were able to pull together a solid racetrack despite the entire state of Minnesota being brown in the day leading up to the race. A couple inches of natural snow would act like some free advertising for the popular event, celebrating its 21st year this weekend, as thousands of fans packed into the bleachers, along the course and inside Spirit Mountain’s chalet to take in the first of two rounds of ACS racing in Duluth this weekend. 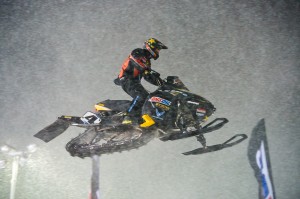 Like somebody shot a black and yellow arrow down the start straight, Robbie Malinoski (Ski-Doo) blew everyone off the hill with the Stud Boy Holeshot, marching into the first corner on his own and pulling out into the lead in front of Ross Martin (Polaris) and Ski-Doo teammate Tim Tremblay to start the year’s first AMSOIL Championship Snocross Pro Open main.

Martin, fearless in his approach to tripling into the first corner off the finish line jump, would catch Malinoski with that daredevil move two laps into the contest, passing last year’s Saturday Duluth National winner and making it stick to take the lead on lap three. Back in the pack Tucker Hibbert (Arctic Cat) would slash past 2011-’12 ACS Pro Lite champ and Pro Open Duluth rookie Kody Kamm (Polaris) and set his site on Tremblay who had the third podium spot in hand behind Martin and Malinoski.

By lap nine (of 24) the Tremblay/Hibbert heavyweight battle would pull the two closer in to Malinoski and Martin and they separated from the rest of the field, only to pass and re-pass lapped riders on the short 24-second lap track. Hibbert, who qualified 2nd behind Tremblay for Saturday’s main, was all over the place trying out new lines to get past Tremblay, but the defending Pro Open champ wasn’t having any of it as he held off Hibbert’s high speed rushes.

With Martin up on Malinoski by three seconds on lap 19, Hibbert would blow off his sled and drop back to 5th behind Cody Thomsen (Arctic Cat). It was about this point in the race where race leader Martin took on a bunch of snow roost from lapped traffic and, two laps later, began to experience some engine issues with his sled. Malinoski tasted blood and closed the gap even further, before Martin’s sled all but conked out on the final downhill straight.

Malinoski, in the right place at the right time, took the lead from Martin and went on for the win. Martin was able to limp over the finish line in 2nd, followed by Tremblay in 3rd. Thomsen would hold off Hibbert for 4th, rounding out your Duluth National top five!

Malinoski: “That was kind of a gift from Ross with his sled going down, but we’re pumped to be up here. I always work hard on my starts and it paid off tonight. But yeah, Ross was just ripping.”

Martin: “I took a lot of snow and my sled started running on one cylinder … barely made it to the finish line.”

Tremblay: “It was crazy out there with the lapped traffic. Then I bent my A-arm so I couldn’t go as fast as I’d have liked. But I’m pretty happy to be up here on the podium.” 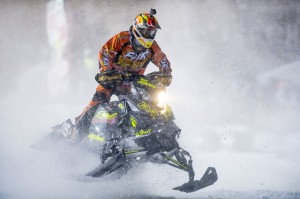 Vermont’s Lincoln Lemieux burst onto the AMSOIL Championship Snocross Pro Lite scene at Duluth, winning both of his qualifiers and leading Saturday’s Pro Lite main event through lap six. But a crash would rock Lemieux out of first place and well off the podium while circling sharks David Joanis (Ski-Doo), Jake Scott (Polaris) and Andrew Lieders (Polaris) were quick to strike – with Joanis fighting off Scott for top honors in the ACS Pro Lite opener.

“This Ski-Doo’s a rocket sled, faster than last year’s … which I didn’t think could happen,” said Joanis, accepting his gold medal for 1st place.

When Lemieux went down and off his sled on lap six, New York’s Scott would take the lead. Two laps later Canada’s Joanis, who pulled the Stud Boy Holeshot, caught and passed Scott and the two separated from the rest of the field. With visibility difficult, although the riders said it wasn’t that bad on the track (worse for the fans in attendance and the 100,000-plus watching the live webcast), Canada’s Alexandre Renaud (Ski-Doo) would pull up into 3rd place, with Lieders and Sweden’s John Stenberg (Ski-Doo) rounding out the top five.

With six laps to go the #115 sled of Joanis was clicking off fast lap after fast lap, putting four seconds on Scott – who in turn was four seconds up on Lieders, who had passed Renaud for third and final podium spot. Joanis, Scott and Lieders would hold their podium positions, followed by Canada’s Max Taillefer (Ski-Doo) in 4th place and Travis Muller (Ski-Doo) in 5th.

Beginning with AMSOIL Championship Snocross’ season-opening round in Duluth, Minn. (Nov. 23-25) and running through the season finale in Lake Geneva, Wis. (March 15-17), CBS Sports Network will broadcast 16 half-hour race shows – all in HD – on Sundays at 10:30 a.m. EST. The AMSOIL Championship Snocross – as an added bonus – will also air in an evening repeat of each show during the week.

Joe Ergo – Snowmobiling Confidence is All*

Unnerving, uncomfortable, unsure, we’ve all been there while riding. Sometimes dictated by trail conditions, other times suspension set-up, but many 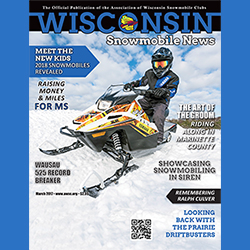 The March issue of Wisconsin Snowmobile News, the last of the season, is now online. Check it out for great year-end features.